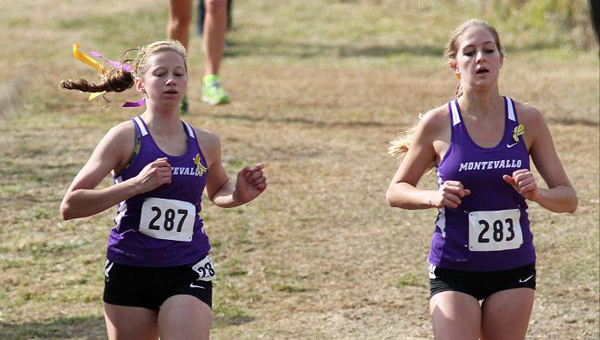 Cheyenne Thompson, left, and Katie Nelson will lead the way for the Montevallo women’s cross-country team, which is ranked No. 1 in the Peach Belt Conference preseason poll. (Contributed)

MONTEVALLO– After a successful 2014 season the Montevallo women’s cross-country team enters the 2015 season ranked No. 1 in the Peach Belt Conference preseason coaches’ poll.

The PBC released their preseason rankings on Tuesday, with the Falcons dominating the voting.  Montevallo received 10 out of 11 first place votes while North Georgia and Flagler rounded out the top three.

The Falcons are returning Katie Nelson who won PBC Runner of the Year, Freshman of the Year, and Individual Champion awards last season.  Also returning to this season’s squad is Cheyenne Thompson, who was second at the PBC last year, and All-Conference runners Anna Leinheiser, Hannah Evans and Seirra Millsaps.

Coaches were not allowed to vote for their own teams. Teams received 11 points for a first place vote, 10 points for a second place vote and so on. Montevallo’s 120 points beat out North Georgia by 12, and was one point away from a perfect preseason ranking.