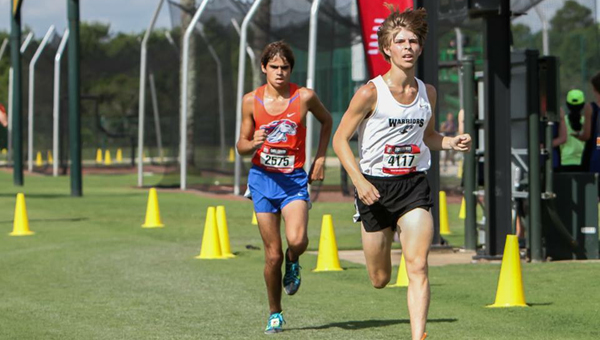 Conner Murphy, front, will be one of the leaders for a Thompson cross-country team hoping to break into the upper echelon of the tough 7A Section 3. (Contributed)

Yet another victim of geography, the Thompson cross-country program has to deal with reality. One of the top-10 programs in the state in class 7A a season ago, the boys’ team couldn’t finish better than sixth in its own section. 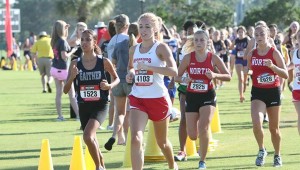 Jessie Puckett, front, will be one of Thompson’s top senior runners this cross-country season. (Contributed)

“We ended our season a little bittersweet because we were one of the best teams (in the state) but didn’t go to state because of the way its drawn up,” Paul Anderton, head coach of the boys and girls teams at Thompson, said in an Aug. 17 phone interview.

Due to the way the AHSAA has set up the cross-country state meets, only the top three teams from each section get invited to state. Which, in Anderton’s opinion, does not provide the best cross-section of teams at the state championship.

“At the state championship you do get the top four to six (teams) correct,” Anderton said. “Six through 12 aren’t the right teams though. You have a couple teams that claim to be top-10 teams, and they are at the state championship, but if they were to run against any team in our section they’d get beat every time.”

There are a few ways this could change, and Anderton joined some of the other coaches in the section in his thoughts that changes are coming, but maybe not the right ones. One of the proposed changes to the current format is to allow another team from each section to compete at state, which in this case would have put Oak Mountain in the state meet last year.

“It’s going to let one more of the teams from our region to go, but it’s going to allow even slower teams to get in somewhere else,” Anderton said as a rebuttal to this idea.

Whatever the future might bring, the 2015 season is shaping up just as last season did. “Right now, five of the top six preseason ranked teams (in 7A) are in Section 3, and we’re right behind them at No. 10,” Anderton said.

Three seniors with loads of experience will lead both the girls and boys teams. For the girls, it will be Jesse Puckett, Gracie Keller and Shai Hunter. For the boys, Conner Murphy, Andrew Jetzel and Christian Anderton will lead the way.

The boys team doesn’t have three of its top runners from last season on a team that averaged about a 17:19 5K, but Anderton feels this team can get its five scoring runners under 17 minutes, while he wants his girls to be under 20:30.

What that will mean for the Warriors at the end of the season remains to be seen. Anderton knows both his boys and girls teams will have to have near-perfect day at the section meet to make the state championship, but that isn’t his focus right now.

“Our chances aren’t any better than they were last year,” he said. “We’re trying to concentrate on what we have to do to be our best. We want to get better up until that sectional meet. We get to that sectional meet and we run our best and we don’t make mistakes and we see what happens. Our goal for the season is to have represented this program as the best team Thompson has ever had.”

There are 16 county-versus-county match ups that will take place in 2015. Let’s take a look. (File) By BAKER ELLIS... read more