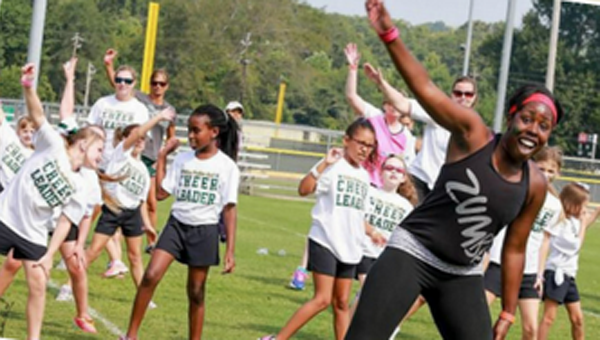 Pelham Park’s Zumbathon will be Aug. 29 from 8-11 a.m. at the youth football field. (Contributed)

PELHAM— Pelham Park is giving residents another reason to Zumba on Aug. 29 as it hosts the second annual Zumbathon from 8-11 a.m. at the Pelham Youth Football Field.

The idea to host a Zumbathon came from one of the board members for the youth football and cheerleading. She taught Zumba classes and thought it would be a great way to fundraise.

Registration for the event is $10 and all the proceeds go to the cheerleading side of the youth football and cheerleading to pay for T-shirts for all the girls. Last year, Verner said they collected enough to cover the cost of 100 T-shirts for the girls and about 50-75 people were participating throughout the course of the day.

“They seem to have a really good time last year,” Verner said. “Even though it was a really hot day that day, and by the time we got out there the heat was really starting to turn on, we still had a pretty decent turn out.”

Zumbathon lasted for about three hours and four instructors took turns leading the dance-style fitness class. Verner said the event will be similar to last year’s.  It also features different levels of Zumba, he said. Instructors will start out at a beginning level and go at a little higher pace for those people who want to.

Last year, the event took place at the football field in the park. This year it will be held at the youth football field, although that could change based on the weather.

Verner said they are excited to host this event again and to see what kind of turnout they get.

“Anything we can do for the community and also helps us do something for the youth that are participating in our park is something that we always get extremely excited about,” he said.

The Kickin’ disAbility Kickball Tournament will not take place at the YMCA on Aug. 22. (Contributed) By JESSA PEASE /... read more