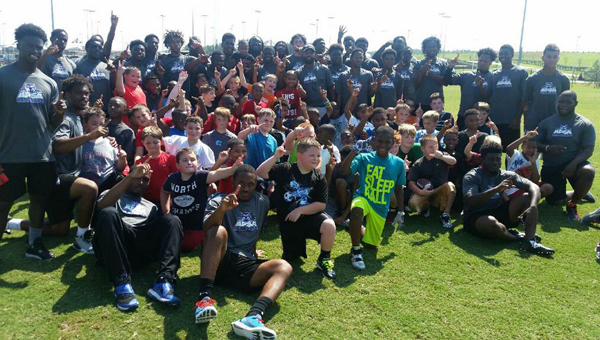 Members of the Alabama Prep Sports Academy pose for a picture with kids from the Calera parks and rec department. (Contributed)

CALERA – What started out as a dream roughly two years ago has finally manifested itself into a reality. The Alabama Prep Sports Academy welcomed in its inaugural class of 40 postgraduate boys on Aug. 1, and is getting set to start its first season. The prep school is for student-athletes who have graduated from high school but need to bolster their academic or athletic resume to get into a two-year or four-year program.

Dewayne Moore, president of Next Level Sports Management in Pelham, in part had the idea for the school and is now the majority owner of the prep academy that offers college credit through Ohio Christian Academy. Moore played college football at San Diego State from 1994-98, and talked about the process of starting the academy.

“We want to aide individuals and help them get into college programs,” Moore said in an Aug. 20 phone interview. “We want to help these kids, that’s the goal.”

The school is the first of its kind in the state, and is one of a number of schools like it across the country. It is in Calera, and the kids are living in an apartment complex in Calera. It is just offering football this year, but will soon offer baseball and basketball as well. Moore said most of the kids coming through the academy are there to get their grades up.

“90 percent (of the kids) are going to be coming here for academic reasons,” Moore said. “Most of these kids could have gotten a scholarship if they had the grades.”

The academic element of the school includes an SAT/ACT prep class that is held twice a day, five days a week for 12 weeks, according to the school’s website, Apsabearcats.org. On an individual basis, the academy will help students choose the proper online classes to take through Ohio Christian Academy. Students who enroll in a four-year college can enroll with up to six hours of class credit without sacrificing any eligibility, and students who enroll in a two-year junior college can enroll with up to 12 hours without losing any eligibility, according to Moore. The decision on how many hours to take or what track to turn down is made on an individual basis.

As far as the football aspect is concerned, the head coach of the Bearcats is Pelham native Derrion Gee, and one of the assistants is Antonio Carter, who played receiver for Alabama from 1999-2004. Murphy is optimistic about the inaugural product they will put on the field.

“We’re looking good,” Moore said. “For where we’re at, we’ve pulled in a lot of great players. We’re still a little rough around the edges, some of them didn’t have an idea if they could sign with a school or not into the summer. For the most part I think we’re going to compete.”

The team did a camp for the Calera youth through the Calera parks and rec department, which Moore said was a resounding success. The first game is Sunday, Aug. 30 against Georgia Prep Sports Academy, at the Calera High School stadium, where all of the Bearcats’ home games will be played. Moore said any child who comes to the Aug. 30 game wearing a Shelby County parks and recreation football team jersey will be admitted for free.

Spain Park’s Wade Streeter will play a key role all season for the Jaguars, including in the early season matchup... read more