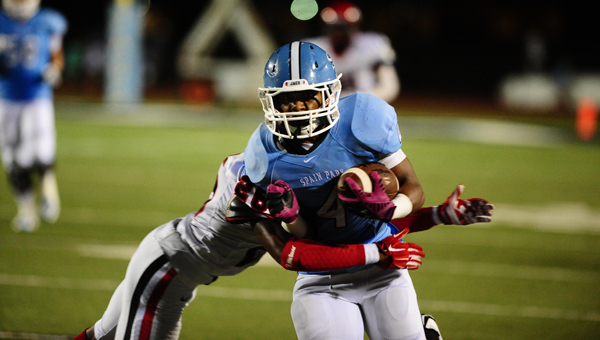 Spain Park’s Wade Streeter will play a key role all season for the Jaguars, including in the early season matchup against county opponent Thompson. (File)

Back again, giving the people what they want. Let’s take an early look at the mid-season county-on-county match ups.

Big game for both teams here. This is the first region game of the season for both the Warriors and Jaguars, and each will want to start off region play on the right foot. Spain Park will be coming off back-to-back games against 6A opponents Austin and Hueytown, both winnable games for the Jaguars, and will likely be taking good mojo and a 2-0 record into the first of two county showdowns. Thompson will be coming off back-to-back games against 6A schools as well, Wetumpka and Pelham. Wetumpka will be a tough first game for the Warriors, as will the Battle of U.S. 31 against Pelham. What record the Warriors will tote into this matchup is anybody’s guess, but a 1-1 record seems fair.

Both teams should have shaken the cobwebs off by this point and provide their best football of the season to date. A matchup to keep an eye on here is how Thompson coach Mark Freeman’s three senior running backs, Frank Mwakajumba, Darius Morton and Carlos Stephens, play against Spain Park’s do-everything stud linebacker Perry Young.

The biggest game of the year for both ACSC schools, the Sky Bowl has become a tradition in the county. Since 2011, Hope has only managed to best Evangel one time however, as the Lightning have gotten the better of the Eagles four of the last five times they have met. Traditionally a high-scoring contest, this one has all the makings of a quarterback-centered shootout. Evangel stud Micah Murphy will do his best to take advantage of a young Hope defense still trying to find its identity. Colin Kirkpatrick, the freshman signal caller for the Eagles, will have to grow up fast in this matchup. He will need to utilize wide out Juan Cuellar as much as possible to keep pace with the points the Lightning will most likely put up.

This matchup falls smack in the middle of region play for both teams, and is the second to last non-regional game of the year for each. Both the Eagles and the Wildcats have the tougher portion of their region games preceding this game, with Calera taking on both Demopolis and Central Tuscaloosa in the weeks prior and Shelby County squaring off against Tallassee and Central Clay County right before. Calera is the better team, and should be able to take care of business at home in the lull before the second half of region play. The Eagles backfield combination of Kyle Harrell, Charles White and quarterback Ty Evans will most likely be too much for Shelby County’s smaller and slower roster to handle, and last year’s 47-6 drubbing is very much on the table as a possibility again in this one.

Region play also bookends this game as well for both the Lions and the Eagles, who are playing for just the fourth time, and the second time since 2001. Briarwood’s first three region games provide two games the Lions should win, or at least are capable of winning, in Jackson-Olin and Hueytown, and one matchup against Homewood where they’ll have to bring their A-game to avenge last season’s 28-6 thumping. Oak Mountain will be coming off a very winnable game at Tuscaloosa County, one of the smallest 7A schools in the state.

Last season the Eagles had no issue handling Briarwood, and beat them soundly 42-12. Barring injuries, there is little reason to think Oak Mountain won’t be able to take care of business again. By this point in the year, new Lion quarterback William Gray will have settled into the flow of the offense, and he along with running back Carson Eddy will have to have big days to keep this one close.

The Huskies will be coming off a game against a Demopolis team that will by that point in the season be rounding into form while Chelsea will be coming off a game it absolutely should win against Chilton County. The third game of the night is also the third game that separates the two sides of region play from both teams schedule. The Hornets hung 64 on Helena last year, the most points allowed by the Huskies all season. Even so, this matchup most likely will make for the most intriguing county-on-county matchup of the night.

One of the intriguing elements of this game, not to mention the rest of the season, for Helena will be the quarterback position. Head coach Watt Parker has no issue splitting snaps between his two quarterbacks, senior Diondre’ Sackreiter and junior Riley Davis, and how he decides to divvy up playing time based on in-game situations or performance will be important to keep an eye on. Chelsea’s strength on offense lies in the backfield, as the combination of Matt Marquet at quarterback and Zalon Reynolds and AJ Jones at running back are all finally healthy at the same time. This combination will try to take advantage of a Helena defensive front with little experience.

Conner Murphy, front, will be one of the leaders for a Thompson cross-country team hoping to break into the upper... read more