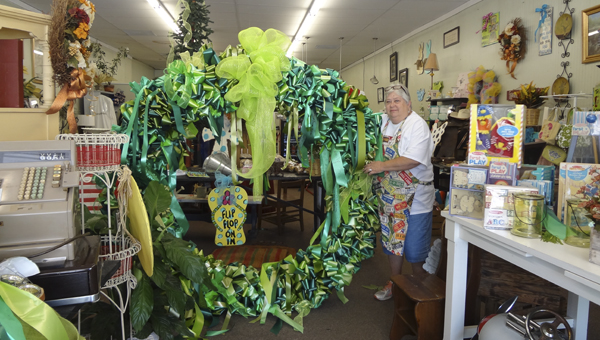 Main Street Florist owner Susan Conn stands next to one of three large wreaths she and volunteers made during a special Columbiana City Council on Aug. 18 using green bows residents had displayed in memory of Haleigh Green. (Reporter Photo/Emily Sparacino)

COLUMBIANA – More than 200 people congregated on Main Street for a special Columbiana City Council meeting on Aug. 18, during which residents and local officials participated in an open discussion on combating crime and improving the city.

“The idea for having the meeting was for the city council and myself to get a feel for whether the city wants us to proceed with … taking action in these habitual high-risk areas,” Columbiana Mayor Stancil Handley said on Aug. 20. “We feel like the town is positive and unified in us moving forward, and that’s what we’re going to do.”

At least 20 people approached the microphone during the two-hour meeting to voice questions or comments about issues such as pockets of crime the city is facing, Handley said.

Handley said the council and the officials listed above, along with community representatives Joe Green and Mazell Reynolds, have formed a panel that will continue to meet to identify the “habitual high-risk areas” throughout the city.

“Then, we will formulate a plan to deal with each area,” Handley said. “Now, I think we’ve got the means and the community support. We have got a fine police department, and I’m so thankful for the assistance of the sheriff and the Shelby County Sheriff’s Office. With their help, I think we’re going to make a difference.”

“Our research has shown us that light is a very effective crime deterrent,” Handley said. “These four new street lights are in place and burning brightly.”

People were invited to bring the green bows they displayed in memory of local teen Haleigh Green to be incorporated in wreaths for her family.

Main Street Florist owner Susan Conn and other volunteers attached the bows to three, 6-foot wreath forms during the meeting.

Conn spearheaded efforts to make the bows in exchange for donations to Green’s family for her funeral expenses. The wreaths will be given to Green’s mother and father, and one will be placed on her grave.

Conn said she had “plenty of ribbons” to make the wreaths.

“They’re stuffed as full as we could get them with the bows,” she said. “I thought we had a really good turnout. Now, it’s up to the city and everybody to implement some kind of plan. I hope it continues, and I’m just proud to have played a little part in it.”