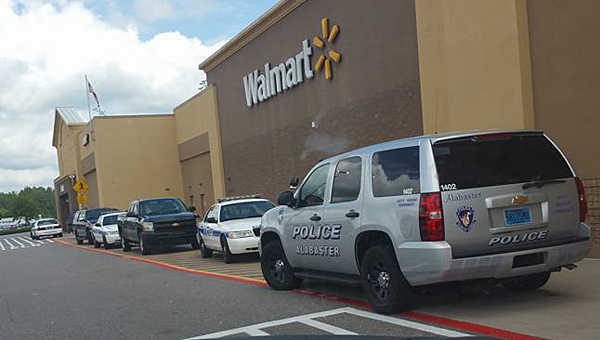 Alabaster Police Department vehicles line the front of the Alabaster Walmart as they investigate a bomb threat on Aug. 20. (Contributed/Kayla Dawn)

ALABASTER – A 25-year-old Alabaster man is facing a felony terrorist threat charge after he allegedly caused the evacuation of the Alabaster Walmart store by making a bomb threat on Aug. 20. 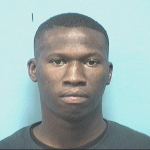 The Alabaster Police Department arrested Cordera Montez Swift, who lists an address on Gold Wire Circle, on Aug. 20 and charged him with one count of making terrorist threats.

The arrest came the same day the Alabaster police and fire departments responded to a call reporting bomb threat at the Walmart store in the Propst Promenade at 11:37 a.m. on Aug. 20.

“Officers arrived on scene and began implementing our standard safety protocol for this type incident,” read an Alabaster Police Department statement issued on Aug. 21. “After conducting a thorough search of the area, the scene was determined to be safe and Walmart resumed normal business.”

The arrest caused an evacuation of the store, according to Swift’s arrest warrant. No injuries were reported in the incident.

After declaring the scene safe, police investigators began gathering information at the scene before identifying Swift as a suspect and arresting him.

Making terrorist threats is a Class C felony, according to Alabama law. If convicted, Swift could face up to 10 years in prison.

Dr. Stacey DeFranco opened the Helena Family Dentistry practice in 1998 and has been in the community ever since. (Reporter... read more