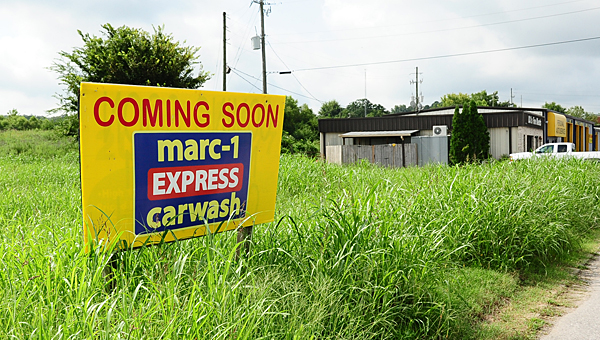 Marc 1 carwashes soon will come to Alabama 119 in Alabaster, pictured, and to U.S. 280 in Chelsea. (Reporter Photo/Neal Wagner)

Drivers on Alabama 119 in Alabaster and on U.S. 280 in Chelsea soon will have a convenient way to keep their vehicles clean, as a locally based carwash company is planning to expand into the two cities.

The Pelham-based Marc 1 carwash company, which currently has locations in Pelham, Hoover, Homewood and Prattville, is planning to open the two new locations over the next year, according to company owner Marcus Littrell.

Once constructed, the full-service car washes will be on Alabama 119 next to the Alabaster Post Office and on U.S. 280 next to the Sonic Drive-In restaurant in Chelsea.

“We are at the end stages of the permitting process for the Alabaster location. Within two weeks, we should have the permits,” Littrell said during an Aug. 20 interview. “We should break ground the first week of September, and we are shooting to be open by December 31. That opening date really depends on the weather.”

Littrell said the company has already purchased the land for the Chelsea location, and is planning to begin construction on the carwash “two to three months after the Alabaster store opens.”

The new carwashes will be modeled after the Marc 1 location next to Zaxby’s off U.S. 31 in Pelham, and will feature 115-foot conveyor-driven wash tunnels with soft-cloth brushes, free vacuums and window-cleaner.

Littrell, a Pelham High School graduate, opened his first location off Industrial Park Road in Pelham in 1986, and has expanded to several locations over the past few decades.

The company decided to expand to Alabaster and Chelsea after seeing both cities’ business growth over the past few years. Littrell also said customers at the company’s existing locations have requested carwashes closer to their homes.

“We saw the Walmart Market going in (on Alabama 119 in Alabaster), and that was a good trigger. Alabaster is on the move,” Littrell said. “It’s the same with Chelsea. They have seen a lot of residential and commercial growth.”

Marc 1 offers a speed pass program, allowing customers to wash as many times as they like at any Marc 1 location for $30 per month. Marc 1 gift cards are valid at all Marc 1 locations, Littrell said.

To learn more about the company, visit Marc1carwash.com.

Hoover City Schools and Shelby County Schools were recently ranked among the top 25 school districts in the state, according... read more