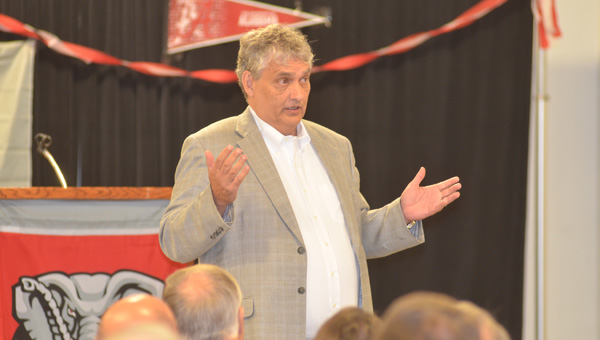 “We’re talking a little bit about the past, the present and the future, and we’ll be focusing on our mission,” said Ron Howard, member of the executive committee. “That is to put students in seats. That’s to put Shelby County students in seats at the University of Alabama.”

Howard gave an update of how alumni can support UA, and said they are in the process of endowing their fifth scholarship to Shelby County Schools through the alumni association.

The doors opened at 5:30 p.m. and guests were able to peruse framed Alabama art from The Beveled Edge, Tide gear from The Sports Station and displays from The Bryant Museum and Alabama Credit Union.

As the alumni finished up barbecue from Jim ‘N Nicks Alabaster, Spillers addressed the audience about his journey at Alabama. Spillers graduated from Pelham High School in 2012.

“It’s an amazing journey thus far,” Spillers said. “(I’m) really trying to connect with individuals and our national network of family at the university… It’s amazing to see the connection that we all have, even after we graduate.”

Spillers spoke on how much scholarships and financial aid help students at Alabama, and how Pelham influenced him as he campaigned for the SGA position independently.

Audience members also got an update on school statistics from Alabama regional recruiter Christy Hudgens. She explained how Alabama is competing on a national level with other universities and has been adding new curriculums to attract more students.

Coach Mike Quenneville, or Coach Q, gave an update on the Alabama Club Hockey program, which is housed in Pelham at the civic center and ice arena. Every home game will be played in Pelham, and Quenneville said they are in the process of try-outs with the team now.

The team’s first game is Sept. 11 against West Virginia. They will play at the Morgantown Ice Arena in West Virginia at 8:30 p.m. Over the course of the season, the Frozen Tide will play Illinois, Arkansas, Georgia, Auburn and more.

Hurt was last to take the microphone, and he held a question and answer session about Alabama football. Perhaps the biggest question on everyone’s mind was Alabama’s quarterback situation.

There are currently five candidates for the starting quarterback position, according to Hurt. Senior Jake Coker, junior Alec Morris, sophomore Cooper Bateman, redshirt freshman David Cornwell and freshman Blake Barnett are all contending for the role.

His best guess: Alabama will likely start more than one quarterback in its first game. They have a lot of capable talent, he said, but not one person who is consistently better than the rest.