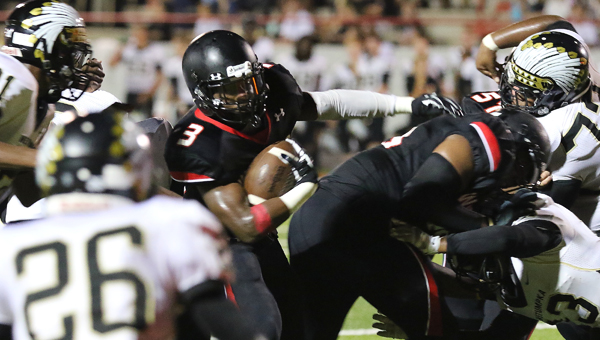 Carlos Stephens looks for space in Thompson’s home opener against Wetumpka on Aug. 21. The Warriors won their first game since 2013 by a final score of 37-13. (Contributed / Eric Starling)

ALABASTER – The Thompson Warriors opened the Freeman era by hosting the Wetumpka Indians. After a 45 minute lightning delay in the first quarter, the fans returned to pack the stands again and watch the Warriors roll to a 37-13.

“This was a great community win,” stated Alabaster School Superintendent, Dr. Wayne Vickers. “From the band to the cheerleaders, to the fans and all the players, this was a total team effort.”

For those fans that came out just looking to see what potential this new team might have, they had an answer after just eight plays from scrimmage for the Warriors. Those eight plays encompassed three drives and three scores for the Warriors pushing them to an early 20-0 lead.

The scoring started with a 22-yard scamper from Carlos Stephens. A missed point after left the score at 6-0.

The Warriors defense pressured the Indians quarterback all through the first quarter causing them to commit four holding penalties. During their second possession, the Warriors also forced a fumble leading to a Senior Quarterback, Walker Lott hitting Chris Lewis for 24-yard strike and a 13-0 lead.

A three and out and a botched snap gave the Warriors the ball at the Indian 48-yard line and Lott went back to work. His pass down field to Austin Davis looked to give the Warriors another score, but he was marked down just short of the goal line. Senior, Frank Mwakajumba pushed the ball across on the next play and the Warriors looked to be rolling.

A forty-five minute lightning delay sent both teams to the locker room and after the break, the Warriors came out a little flat. The only scoring in the second quarter was a Wetumpka touchdown just into the second.

“We hit some adversity after the lightning strike,” stated coach Mark Freeman. “Things just weren’t going our way, but we got them in the locker room at halftime, and they responded in the second half.”

Thompson took their first three possessions in the second half and turned them into points. Started at their own 24, the Warriors drove the field and capped the drive with a 2-yard dive by Stephens for the score. Stephens also scored on the third possession from three yards out. He finished the night with 17 rushes for 117 yards and three touchdowns.

Their second possession stalled at the 7-yard line, but Dmitri Davis nailed a short field goal to add three to the board. Wetumpka would add a late touchdown in the fourth quarter to make the final 37-13.

“A win is great, but our guys were told win or lose, tomorrow night it’s gone and we have to start worrying about Pelham,” said Coach Freeman. “A win or a lose tonight will not define our season.”

Next week the Warriors host rival Pelham in the Battle of Highway 31.