One injured in pair of Alabaster house fires 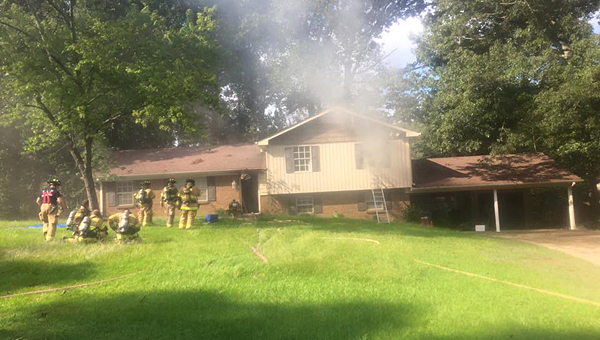 Alabaster firefighters extinguish a blaze at a residential fire in the 100 block of Hickory Street in Maylene on Aug. 28. The fire was one of two the AFD responded to during a three-day span. (Contributed)

ALABASTER – One person was hospitalized for smoke inhalation in a pair of residential house fires in Alabaster during the week of Aug. 17-21, but no serious injuries were reported in the blazes, according to the city’s fire chief.

The Alabaster Fire Department responded to two residential fires in a three-day span: One in the 100 block of Hickory Street off Shelby County 17 in the western end of the city on Aug. 18 and another in the 100 block of Kentwood Drive off Kent Dairy Road on Aug. 20.

The Fire Department responded to the Aug. 18 fire at 4:14 p.m. after receiving a call reporting smoke and flames were visible from the outside of the residence. About 20 firefighters responded to the scene, and were able to bring the fire under control quickly before the house suffered significant damage or spread to surrounding areas.

Alabaster Fire Chief Jim Golden said one person who was in the house at the time the fire started was transported by ambulance to Shelby Baptist Medical Center to be treated for smoke inhalation. The victim was treated at the hospital and released.

Golden said about 20 firefighters also responded to the Kentwood Drive fire on Aug. 20 at about 11:47 p.m., and said smoke and flames were visible from the outside of the house when firefighters arrived.

AFD was able to extinguish the fire before it caused significant damage to the house, and no injuries were reported in the blaze.

Because several people were in each house when the fires started, Golden credited working smoke alarms with saving lives in both incidents.

“These were both occupied when the fires started. It really underscores the importance of having working smoke alarms,” Golden said. “Especially with the Kentwood fire. Most of us are asleep at 11:47 p.m., and that working smoke alarm is your first layer of notification.”

Golden encouraged all Alabaster residents to ensure they have working smoke detectors in their homes, and asked residents to call AFD at 621-8752 if they do not. City firefighters are available to test, install and provide smoke detectors free of charge for all city residents, Golden said.

“It’s our goal for every house in Alabaster to have a working smoke detector,” Golden said.