Gentry sentenced to life without parole for killing his grandmother

MONTGOMERY – A Shelby County man charged with killing his grandmother in 2012 has been convicted of capital murder and sentenced to life imprisonment without the possibility of parole, Alabama Attorney General Luther Strange announced on Aug. 25. 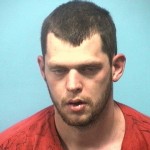 Daniel Scott Gentry, 27, formerly of Chelsea, pleaded guilty to the March 28, 2012 murder of his grandmother, 64-year-old Carrie Elaine Gentry, at her home on Chelsea Road.

“According to information presented by prosecutors, Ms. Gentry’s son reported to the Shelby County Sheriff’s Office on March 29, 2012, that she was missing,” read a release from Strange’s office. “A search was conducted, but she could not be located. An investigation determined that Daniel Gentry was the last person to see her alive.”

Carrie Elaine Gentry’s body was found in a vehicle submerged in an abandoned Leeds quarry in April 2012. Former Shelby County District Attorney Robby Owens said she was allegedly stabbed, struck with a hammer and possibly strangled.

Daniel Gentry reportedly lived on his grandmother’s property, but not in her home. Investigators found blood in several areas of Carrie Elaine Gentry’s home that was linked to her by DNA.

Gentry was indicted on a capital murder charge and pleaded not guilty by reason of mental disease or defect to the charge during his arraignment before Circuit Judge Bill Bostick in July 2012. Bostick did not set a trial date during the arraignment, and said Gentry will have to have a mental evaluation by the state.

Earlier this year, Daniel Gentry had requested to be sentenced to life in prison with the possibility of parole in a letter filed in Shelby County Circuit Court and addressed to Bostick and the Alabama Attorney General’s Office.

“I am sending a request for a life sentence with the chance at parole and possibly release,” Gentry wrote in the letter. “If you will except (sic) my request for a life sentence with a chance at parole, please sentence me quickly. I am in solitary confinement and have been for over nine months. However, I cannot except (sic) a life with out parole sentence. I am hoping your office will have mercy on me and save my family from a trial.

“I do not feel that waiting until a few weeks before trial is proper to handle all that is needed to be done in my case,” Gentry continued. “No one except me has been requesting my medical records. And I feel a head exam is extremely necessary in my case. I do not wish to go beyond my attorney’s knowledge. But I am anxious and cautiously preparing for the scenario that no plea agreement will be met, because week and week goes by and no plea offer has been made.”

“I cannot explain all of my thoughts at the time of this tragic incident, though a terrible mistake was made,” Gentry wrote in the letter. “Even though I know that I was not of sound mind I would like to respectfully request and I will respectfully accept a life sentence with the chance at parole and possible release.”

As the investigation progressed, Daniel Gentry was interviewed and confessed to murdering of his grandmother in her home, the release read. He also admitted that he cleaned up the house and disposed of her body in the quarry, the Aug. 25 release read.

“This murder was a terrible violation of human decency that horrifies us all,” Strange wrote in the release. “At the very least, justice demands that he spend the rest of his life in prison, as provided by today’s sentence.”