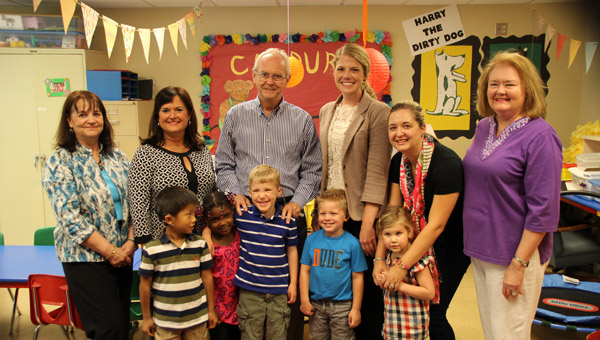 Though decades have passed since Shelby County residents Glenda Lott and Toni Vaughn were members of the University of Alabama’s Delta Zeta Sorority chapter, the women are extending their involvement––and advancing the organization’s national philanthropy––through a local alumnae group.

Along with nearly 50 other members of the Delta Zeta Birmingham Alumnae Chapter, Lott and Vaughn are working on last-minute details for the group’s third annual fundraising event, Make Some Noise Gameday Fashion Show, Luncheon and Silent Auction, on Aug. 29 to benefit the Alabama Ear Institute’s Alabama School for Hearing in Birmingham.

“Speech and hearing is a national philanthropy for Delta Zeta nationwide, so that’s why we chose this,” Lott said. “We want to give back to the community and do something local for our organizations.”

All profits from the event will go to the Alabama Ear Institute, a non-profit foundation formed in 1992 by Dr. Robert L. Baldwin “with a mission of improving the quality of life for all individuals with hearing loss and their families,” a press release read.

The Alabama School for Hearing is a pre-school program of the AEI for children ages 3 through 5 who are deaf or hard of hearing.

Lott, of Hoover, is a retired schoolteacher in Hoover City Schools and has been a member of the Birmingham alumnae chapter since it re-chartered in 2010.

Of its 50 members, about a dozen members live in Shelby County, she said.

Members’ ages vary; some members are right out of college, while others are decades removed.

In addition to contributing to the sorority’s speech and hearing philanthropy, the Birmingham alumnae chapter has supported Delta Zeta’s national foundation, various collegiate chapters and community organizations, including Open Hands, Overflowing Hearts and Three Hots and a Cot.

The chapter also holds social activities for members, but Lott stressed that the alumnae group’s efforts are rooted in giving back as outlined in the sorority’s creed.

“We can still get together and plan projects that help our community,” Lott said. “It’s just nice to come together and work toward a common goal and share that passion.”

Lott is serving her second term as the Birmingham alumnae chapter’s president.

Vaughn, who lives in Chelsea, is the fundraising chairman. She first became involved with the local alumnae group in the 1980s and served as its president for two years.

After she––and the group itself––took a hiatus, Vaughn joined the current chapter in 2014 following the Make Some Noise event.

“This sorority has meant so much to me, and the people came into my life because of the sorority meant so much,” Vaughn said. “It (was) time for me to get involved again. I like being involved in a group that actually does something, and this group does.”

Models in the Make Some Noise gameday fashion show will be from the Alabama School for Hearing and the community. Attendees should expect appearances from UA mascot Big Al, Auburn mascot Aubie and local alumna Janet Hall from Fox6 News.

Tickets for Make Some Noise can be purchased online from Eventbrite.com.

“This is our big event,” Vaughn said, noting the Alabama Hearing School operates on donations such as those generated at Make Some Noise. “We know that the money is going directly to the children.”