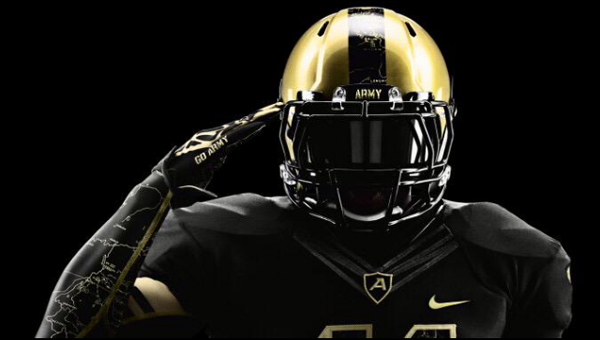 Kyle Harrell has committed to playing football next year for the United States Military Academy at West Point. (Contributed)

CALERA – Kyle Harrell has seen some talent in his day. The Calera senior running back/safety has spent the last two years looking up to Ronnie Clark and ShaKeith Tyes. Clark was a highly celebrated recruit out of high school who graduated two years ago, and is now playing for Nick Saban in Tuscaloosa. Tyes became the school’s all-time leading offensive producer in four categories last year as a senior, and is now playing college ball in Kansas. Now, Harrell gets to continue the tradition of marquee backfield talent going on to play at the next level, and has committed to playing football at the United States Military Academy at West Point.

Harrell says he’s 6-feet-one-inch, although he looks a shade over that. He weighed 185 pounds after his junior season but after a long offseason in the weight room is up to 205 pounds. He’s been clocked at a 4.5-second 40-yard dash and it doesn’t take a recruiting guru to look at him and understand he’s a special athlete. He’s a big, fast target on offense and a sure tackler with a nose for the ball on defense.

Harrell has wanted to play football in college for as long as he can remember, probably longer than that, he said. He started playing in the first grade and has no memory of a time apart from the game. He knew he had a chance to be special, however, when he was a sophomore and he saw his older brother, Tyler getting recruited. He now plays for Tennessee Tech.

“It’s always been my dream, since first grade,” Harrell said. “When my brother started getting recruited my 10th grade year, his senior year, I knew what I had to do to be a Division I athlete. I hit the gym real hard, and just have been working really hard to get here.”

The recruiting letters started to trickle in after Harrell’s junior season, but in the summer, head coach Wiley McKeller approached him to see if he’d be interested in attending a military school, because there was interest from Navy and Army. Harrell talked with his parents and decided that opportunity was one he couldn’t easily pass up. Soon after, Army reached out and offered a scholarship, which Harrell sat on for about a month before calling the Army coaches to tell them he’d made his decision to attend.

As Coach McKeller expressed, West Point will be a different experience than other schools. More responsibility, a stricter schedule and more rigorous classes will highlight Harrell’s college career. That doesn’t hinder Harrell’s desire to go, saying instead it excites him.

“It’s a challenge,” Harrell said. “I know it’s going to be a challenge and I’m excited about that.

Before he heads North, however, he has one more season of high school football to worry about. He still has a sour taste in his mouth from last seasons tough second round playoff exit, and he plans to do whatever he can to leave his last high school football field a winner.

“We had a chance last year and we came up short,” Harrell said. ‘This year we’re hungrier, we’re hungrier and want it twice as bad.”