Organization awarded for helping those with mental illness 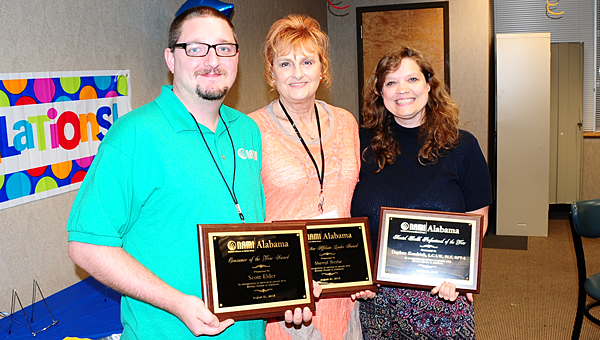 ALABASTER – Five years ago, Scott Elder could not imagine doing what he does now.

Having been diagnosed with a mental illness shortly after beginning college classes, Elder reached out to a newly formed resource in Shelby County. Five years later, it has changed his life.

“Heck no, this is not the life I had planned for myself,” Elder said during an Aug. 25 meeting of the Shelby County chapter of the National Alliance on Mental Illness. “But it’s definitely a good life to have.”

When he began attending NAMI support meetings in 2010, Elder’s symptoms began to improve rapidly, and he eventually became a model for the positive impact the organization can have in the lives of locals who are struggling with mental illness.

As Elder improved, he turned his attention to helping others, and today is one of the Shelby County chapter’s strongest certified peer specialists. Elder regularly leads mental illness recovery groups at Bryce Hospital, works for the Jefferson-Blount-St. Clair County Mental Health Authority and works with probate judges in an effort to help those who are facing the challenges he has overcome.

“The other jobs I had before this were basically flipping pizza,” Elder said. “Now, I get to help people when they are struggling the most. That is so rewarding to me.”

Elder’s efforts to help an often-overlooked segment of the population recently helped earn him and his colleagues some praise from the state NAMI organization.

“To have three people win awards, that’s awesome,” Treslar said during a celebration of the chapter following the peer support group meetings on Aug. 25.

The Shelby County chapter, through its Family-to-Family courses, also reaches out to support families and loved ones of those facing mental illness.

“We teach about mental illness, what to do with loved ones who are facing mental illnesses, how to cope and more,” said Family-to-Family program organizer Laura Helenius.

Those interested in taking part in the Family-to-Family program should contact Helenius at laurajnh@gmail.com or call her at 267-2986. To learn more about NAMI Shelby County, visit Namishelby.com.