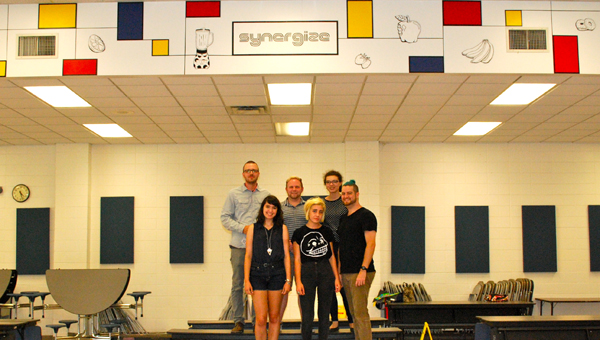 NORTH SHELBY—The Oak Mountain Elementary School cafeteria has a new Mondrian-style flair, thanks to the hard work and vision of a group of University of Montevallo art students.

The five students, under the direction of Professor Michael Willett, spent a month over the summer planning, creating and installing a large-scale piece that covers a 75-foot by 45-foot rectangular perimeter around the OMES cafeteria ceiling.

“We were asked to incorporate the seven habits (from Stephen Covey’s book, ‘The 7 Habits of Highly Effective People’) and a milk carton,” Willett said of the project guidelines.

The students incorporated the seven habits— “be proactive,” “begin with the end in mind,” “put things first,” “think win-win,” “seek first to understand,” “synergize” and “sharpen the saw”—with a variety of hand drawn images, and tied the piece together with Piet Mondrian-inspired lines and squares in the OMES colors.

“We sat down our first meeting and planned,” Montevallo senior and art student, AnnaLeah Commer said. “It was hard to visualize what it was going to be.”

First, Commer and fellow art students, Ben Kaiser, Amy George and Britt Terrell, sketched images of items such as fruits, vegetables, milk cartons and a variety of foods onto 8-and-a-half-inch by 11-inch sheets of paper. Then, the drawings were given to sculpture and new media student, Robby Wise, to be digitized.

Each image was then projected onto wood, cut out with a jigsaw and hand painted. The seven habits were also painted onto separate wood pieces.

“It was a step-by-step thing where every step had to be planned,” Wise said.

After all of the components were complete, the students transported them to OMES for installation.

“We had that one week to install,” Commer said, noting the challenge of working under a tight deadline. “We all have other jobs and we were trying to find time (to work together).”

Paint for the project was donated by Rozar’s Paint Supply in Birmingham and some funding was provided through a Fuel Up to Play 60 grant, but some cost came out of the students’ pockets, OMES Principal Debbie Horton said.

“There’s not enough money to pay them what they deserve for this,” Horton said.

The piece has been a welcome addition to the OMES cafeteria, Principal Debbie Horton said. As a Leader In Me school, the faculty and staff at OMES work to incorporate the seven habits into the curriculum and day-to-day activities of students.

“(The students) love it!” Horton said. “They’re reading the walls… it’s infusing that language into everything we do at school.”