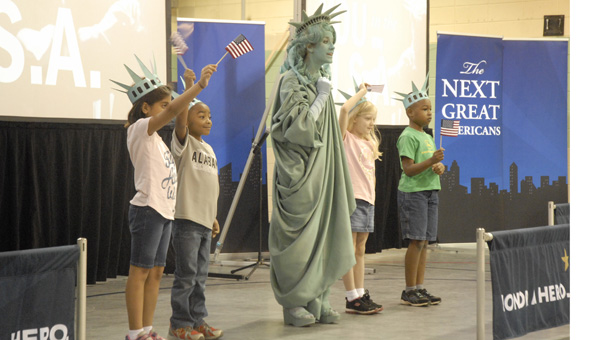 PELHAM— Second grade students at Valley Elementary School were visited by Libby Liberty Aug. 28 at 8:30 a.m. as a part of a Super Citizens program. Libby arrived at the school on the “Next Great Americans” bus and put on a 45-minute educational show featuring original music and videos.

“It’s a really fantastic program and the kids get super excited about it,” said Kristin Sharp, the actress who plays Libby. “Libby Liberty comes and excites the kids about their freedom and tells the story of the State of Liberty — how she was built, how tall she is.”

Using a tape measurer, Sharp told the students that the Statue of Liberty’s nose is the size of Harry Potter, her finger is the size of a car and her mouth is the size of an electric guitar. She also pointed out that she would wear a size 879 in women’s shoes if they made them big enough.

It’s interactive program with the children that introduces them to a 10-week education program. The second-graders will learn segments throughout the day about their freedoms and responsibilities as citizens.

At the end of the 10 weeks, the students will nominate a local hero. Sharp said it could be the janitor, someone’s dad, a veteran or the mom who comes to read to the students. The local hero is honored with a Statue of Liberty pin.

Students in Lyndsay Anderson’s class, Aleksandra and Ada Beth led the audience in the Pledge of Allegiance before the program started, and Flynt, Brian and Chimenum helped with the sing-a-long portion of the program.

Sharp has been playing Libby Liberty for about eight months, and she said she enjoys it. She got into the role through an agent and her performance background.

“When I first heard about it I was like ‘Oh my goodness. Painting myself green everyday for as many times as I do, that sounds awful,’” Sharp said. “Then I went to one of our first kickoffs and I saw the 500 children singing our theme song and getting excited.”

Liberty Learning also visited the fifth-graders at Valley Intermediate School Aug. 28 at 1:30 p.m. The program visited many schools throughout the state and Sharp said they are hoping to continue to grow into more.