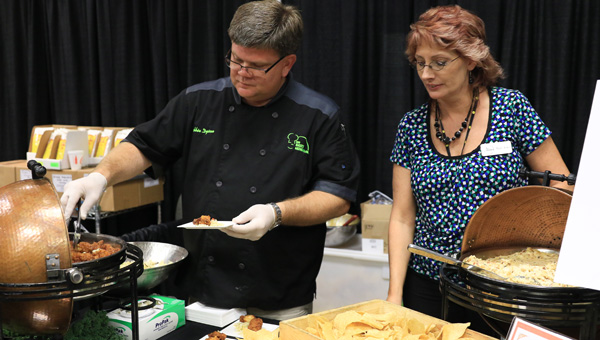 The Happy Catering Co. was one of dozens of vendors serving about 300 people at the Taste of Pelham Aug. 25. (For the reporter / Dawn Harrison)

PELHAM— Sausage and pimento cheese bites, three-layered lasagna, Caribbean jerk chicken and red velvet mini cupcakes were only some of the dishes guests of the third annual Taste of Pelham sampled Aug. 25. 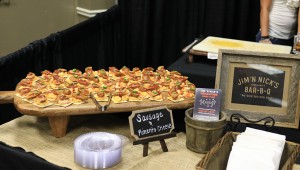 Jim ‘N Nicks Bar-B-Q provided samples of sausage and pimento cheese bites to guests at the Taste of Pelham. (For the reporter / Dawn Harrison)

It was standing room only as attendees made their way through the dozens of caterers, restaurateurs, food trucks and bakers. Pelham City Councilman Maurice Mercer said they would likely have to move to another location next year to make room for the growing interest in the.

“We were very pleased with the turnout particularly because we moved the date from October to August, and we weren’t sure if we were going to lose people or not,” said event coordinator Barbara Roberts. “Apparently we did not.”

She said they had a minimum of 300 people attend the event, and, at its height, Roberts guessed about 400 were in attendance. She said they are still figuring out the official count based on ticket sales.

“Everyone had very good compliments, both elected officials and the public,” Roberts said. “All night long I did not hear one complaint. All I heard were compliments.”

Live music allowed for guests to dance while enjoying sampling, and a new indoor set up was arranged to make room for the increase in foot traffic. Although there were not food trucks outside, their food was available at booths inside.

Pelham has coined itself as the perfect place to play and stay, and Mercer said this was a way that Pelham was trying to live up to the “play” part of the slogan.

The Taste of Pelham not only brings awareness to businesses, but also the public library in Pelham. This event served as a fundraiser for the new library building that will feature larger meeting rooms, technology upgrades and more. Roberts said they are still in the process of determining how much money was raised.

Roberts said her favorite moment of the night was about when it became obvious they were going to have a good crowd around 6:15-6:20 p.m. She said she was happy they didn’t suffer a setback because of the date change.

“It’s a great event in Pelham to showcase the local businesses,” Mercer said. “So often, when people think of going out to have dinner, a lot of people think they have to go to Hoover or U.S. 280. The Taste of Pelham showcases quality local restaurants within five miles of Pelham.”