Chargers trampled in opener at Chambers, 42-12 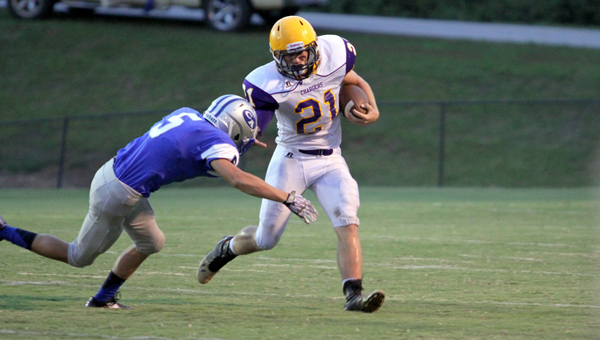 LAFAYETTE– After losing on a late missed field goal last August at Cornerstone Christian School, Chambers Academy wasted little time Friday in a 42-12 rout of the Chargers to open the 2015 AISA Class A football season. The win was Chambers’ first in a season opener since beating the Chargers in the 2010 opener.

Cornerstone was plagued on offense through most of the game, being held below 200 yards, including less than 30 yards of total offense and no first downs in the first half.

“We played real sloppy on offense. Way too many penalties,” said Tim Smith, Cornerstone head coach. “We will go back to work on Monday. The good news is we have really good kids, and I know they will work to get better.”

Chambers struck pay dirt on the second play of the game when junior quarterback Malik Lyons, who rushed for more than 1,000 yards last season, broke a 63-yard touchdown run to give the Rebels a 6-0 lead. From there on the Rebels fed their senior running back Christian Gillespie. The transfer from Beulah High School racked up 186 yards and four touchdowns through three quarters of action, beginning with a 23-yard touchdown run and a 2-point conversion run to make it 14-0.

Johntavious Flournoy added a goal-line TD run early in the second quarter, and Lyons converted the 2-point try to make it 22-0. Gillespie scored the final three scores in the game for Chambers.

Despite collecting only 17 yards on the ground in the first half, Cornerstone finished the night with 149 yards on 24 rushes. CCS quarterback Tyler McNamee had two completions for 31 yards.

Cade Adams led the way with 15 carries for 110 yards, including a 21-yard touchdown late in the third quarter to put the Chargers on the board, 42-6.

Cornerstone added another score in the fourth quarter on a 26-yard pass from McNamee to Jeffrey Odgers. Both of Jace Bailey’s extra-point kicks were blocked.

Cornerstone (0-1) will remain on the road next week, traveling to Lakeside School in Eufaula on Sept. 4 for a 7 p.m. kickoff.

By BAKER ELLIS / Sports Editor ELMORE – On the opening night of the season for the Coosa Valley Rebels,... read more