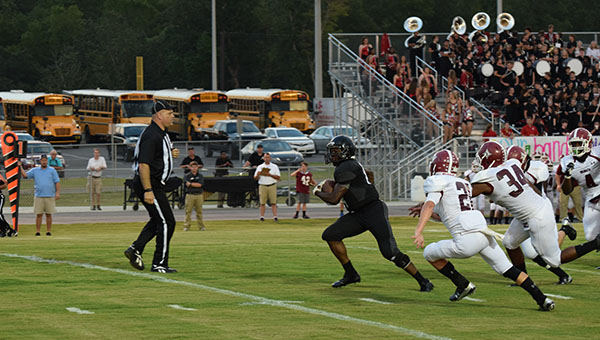 Helena senior running back Olford Ray blows past the Shelby County defense on his way to score one of his two rushing touchdowns on the night. (Contributed/Brian Vansant)

HELENA–The term instant classic isn’t thrown around too often, but when the Shelby County Wildcats and Helena Huskies squared off at Husky Stadium on Friday, Aug. 28, the outcome was one that players, coaches and fans will remember for quite some time.

Offensively, The Huskies and Wildcats were impressive all night long in a game that was delayed more than an hour due to lightning and inclement weather.

Helena was able to squeak out a 32-31 victory after blocking Shelby County’s extra point attempt that would’ve tied the game at 32.

Helena wide receiver Kourtney Moore then recovered Shelby County’s onside kick attempt with 1:50 remaining in the game, and Helena was able to bleed the clock to preserve the victory and start the season 1-0.

Helena opened the game on fire offensively as Helena quarterback Riley Davis led the Huskies down the field after multiple completions to Moore. The opening drive was capped off by Helena senior running back Olford Ray, who burst up the middle for a 12-yard touchdown run to put the Huskies up 7-0.

On Shelby County’s opening drive, the Helena defense came up with a big turnover as Helena defensive back Nash Adams intercepted Wildcats quarterback Mason Blythe’s pass that gave the Huskies the ball back.

Helena would capitalize on the Wildcats mistake, and march 65 yards down the field where Ray once again found the end zone on a 15-yard touchdown run to put the Huskies up 14-0.

Shelby County would not go down easily however, as the run-heavy Wildcats offense would quickly answer, as Shelby County fullback Aramee Callaway would break off a 61-yard touchdown run to pull the Wildcats back within seven, making the score 14-7 in favor of Helena with 2:54 remaining in the first quarter.

The next offensive scoring drive for Helena was sparked by a key fake punt that the Huskies converted to keep their drive alive. The fake punt gave the Huskies a first and goal, where Davis then kept the ball up the middle on a quarterback draw to score from five yards out to extend the Huskies lead to 20-7 after the missed extra point.

Shelby County would once again answer Helena, by scoring a rare touchdown through the air. Blythe connected with wide receiver Deon Carter for a 63-yard touchdown to make the score 20-13 after Helena blocked the Wildcats extra point.

The two teams would continue to trade scores and with eight seconds remaining in the second quarter, the score was 32-19 in favor of Helena as the game was delayed due to lightning.

“I’m just real proud of the guys bowing their neck and their offense (Shelby County) is really good and we knew it was really good and we knew they were going to be able and outman us up front,” said Parker. “I’m pleased with the way the guys handled themselves this week and with the rain delay to come back out and play hard. My hats off to coach Childress and Shelby County also.”

The teams came back onto the field for a quick warm-up after the weather delay and then finished the last eight seconds of the second quarter before immediately going into the third quarter of play.

The third quarter saw good defensive plays by both teams but it was Davis who had a costly turnover for the Huskies toward the end of the quarter that switched momentum to the Wildcats side.

Helena still held a 32-19 lead and was inside the Wildcats 10-yard line when Davis scampered up the middle and fumbled the ball and Shelby County recovered on the one-yard line.

Shelby County would take advantage of the turnover and drive the ball the length of the field on a 13-play scoring drive capped off by an 18-yard touchdown run by Callaway to make the score 32-25.

Despite racking up 404 total yards of offense, the Wildcats were plagued by problems in special teams that saw multiple points left on the field, including the blocked extra point that sealed the victory for Helena.

Helena running back Devan Walker finished the night with 126 yards rushing and two touchdowns as the Huskies offense racked up 351 total yards of offense.

“We really were expecting this kind of a war and a battle and we hoped we could score enough points to keep us in the ballgame,” said Parker. “Our defense got some timely turnovers and I’m just really proud of the effort against a very, very good Shelby County team. Their offense is probably going to be as good as anybody’s in this area.”

Next on the schedule for Helena is area opponent Wilcox Central, who the Huskies will face at home on Friday, Sept. 4.

Shelby County will face Central of Clay County in a region game on the road on Friday, Sept. 4.