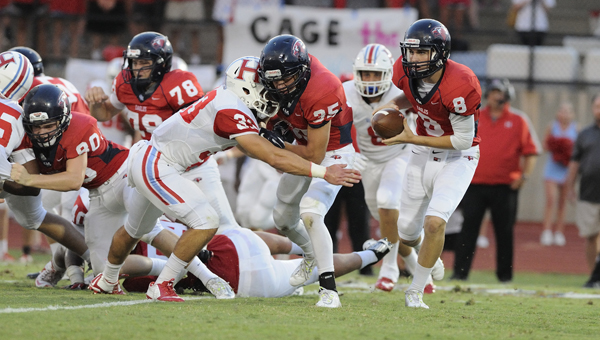 NORTH SHELBY – In a game highlighted by who wasn’t present for Oak Mountain, the Eagles dropped their home opener 31- 0 at the hands of visiting Hillcrest-Tuscaloosa. A number of Oak Mountain players were on the sidelines for this contest, including quarterback Warren Shader and free safety/ receiver Payton Youngblood, and Oak Mountain head coach Cris Bell was not present at the game.

According to Oak Mountain coaches after the game, Youngblood missed the game due to an injured shoulder, an injury he sustained in practice, and was kept out of the game as a precautionary measure. Bell said after the game that his team was “in violation of AHSAA rules,” and that he was serving a one-game suspension as a result. Bell went on to say that two players, presumably Shader being one of them, had to be suspended a game due to a camp they participated in over Christmas break.

Bell went on to say the original suspension handed down by the AHSAA was a two game suspension for both players, but Bell voluntarily served a one-game suspension to alleviate a game from each of his players’ suspensions.

As far as the action on the field was concerned on this night, it was not pretty for the home team. Brian Robinson, Hillcrest-Tuscaloosa’s stud junior running back, started the scoring off with over nine minutes left in the first quarter via a 17-yard touchdown reception from quarterback Cole Frederick. Less than three minutes later, Robinson tossed a pass to Jahi Brown for a 37 yard touchdown, and added a 1-yard touchdown run later in the second quarter to give him a receiving, rushing and passing touchdown in the first half.

Backup quarterback Wyatt Legas was 4-9 throwing the ball for 31 yards, while Logan Webb went 1-6 for 0 yards. Coleman Reeves led the way for the Eagles on the ground, with 16 carries for 88 yards. Oak Mountain will attempt to rebound next week with a game against Vestavia Hills on the road.

Chargers trampled in opener at Chambers, 42-12

Cornerstone’s Logan Tucker tries to break free of a Chambers Academy tackler on Aug. 28 as the Chargers fell 42-12.... read more