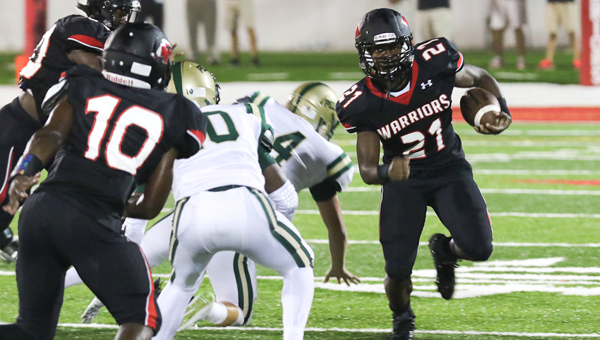 Frank Mwakajumba gets around the edge during Thompson’s 43-13 rout of Pelham on Aug. 28. (Contributed / Eric Starling)

Thompson’s defense was effectively able to shut down Pelham’s offense, holding the Panthers to just one offensive score throughout the night. These two things, coupled with Pelham losing the battle for field position, made a difficult night for the Panthers.

“I’m happy for our kids. It’s a rival. They are 10 minutes up the road. Their coach is a friend of mine, and we are both in the same situation here: We are trying to come in and make these programs better than they were when we got here,” said THS head coach Mark Freeman. “I’m proud of our kids for getting a win, I’m proud of the students and I’m really happy for everybody because it is a rival.”

Thompson was first to score in the first quarter with a 56-yard drive by junior Austin Davis. The Warriors capitalized on Davis’ run putting the score at 7-0 with 10:50 left in the first, giving Thompson a gain of 73 yards in three plays.

Thompson’s defense held the Panthers. After gaining possession of the ball, Thompson’s running back Stephens scored a 22-yard touchdown placing the panthers down by two possessions.

The Warriors led the Panthers 14-0 at the end of the first quarter.

Thompson scored again halfway through the second quarter after Pelham’s punt snapped over the kickers head, allowing the Warriors to recover the ball. A muffed punt by Pelham allowed Thompson to score again by recovering the ball on its own 11-yard line. Jordan Haywood capitalized on this advantage with a 5-yard touchdown.

At the half, the Warriors led the Panthers 31-0, but the Panthers wouldn’t go down without a fight. A pick six interception by Edward Gipson resulted in a 53-yard touchdown catch in the third quarter.

An intentional grounding from its own endzone led to a safety against Pelham, giving Thompson an additional two points.

A 31-yard run by Stephens and a punt recovery by Thompson resulted in a field goal with 7:03 left in the fourth quarter. Pelham answered this play with a 13-yard touchdown reception by Kasey Clark, but the Panthers weren’t able to get the two-point conversion.

“We came out slow, and Thompson came out fast early in the game,” said Pelham Coach Tom Causey. “I give coach Freeman and his staff all the credit in the world. The players, they jumped on us, and I thought our defense played lights out in the second half.

“We just made way too many mistakes on the offense and put them in a bind all night long. I hated for our seniors to lose this game, but we will rebound and come back next week for the game.”

One of the highlights for week two football will most assuredly be Chelsea vs. Briarwood, in a game that Chelsea’s... read more