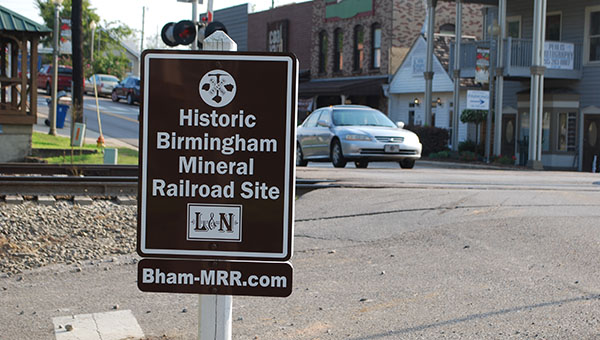 HELENA–The city of Helena is widely known for its rich history, and much of that history revolves around the railroad tracks that run through the heart of Helena.

Helena, along with other surrounding cities is being recognized through the Historic Birmingham Mineral Railroad Signs Project.

The project consists of installing signs at various locations around the Birmingham area and in surrounding cities where the 240 mile long Birmingham Mineral Railroad ran during its century-long era from 1884-1988 so that people will become more aware of that part of this area’s history, according to the projects website.

James Lowery, project coordinator for the railroad signs project, said that Helena is one of several cities being recognized and the project was designed with the general public in mind and to make them aware of the signs.

“The Birmingham Mineral Railroad provided passenger service in Helena to Birmingham for people to shop, work and for entertainment,” said Lowery. “This is what provided economic development for the Birmingham area. There was no way of transportation before except wagons and mules.”

Four signs in total have been placed in Helena that read, “Historic Birmingham Mineral Railroad Site” and Lowery said the current sites where the signs have been placed are two at the Hillsboro trail in Helena, The Depot Deli and at the Helena Amphitheater.

“Where I’ve got one of them up is beside the front door of The Depot Deli and Grill,” said Lowery. “That’s one of the old passenger depots and what it provided was taking coal products from mines. They also had passenger service for Helena into Birmingham. That opened up a lot of economic developments and before that, it was a several day trip and the depot made it a one day trip.”

Lowery said there are currently 34 signs that have been installed at various sights and more are scheduled to go up.

One of the neat parts of the project will be the tours that will become available.

“One of key things is the driving and walking tours and people will be able to go to the different places to see the old rail road bed,” said Lowery.

A full list of the project description, then and now photographs, maps and more can be found at Bham-mrr.com.