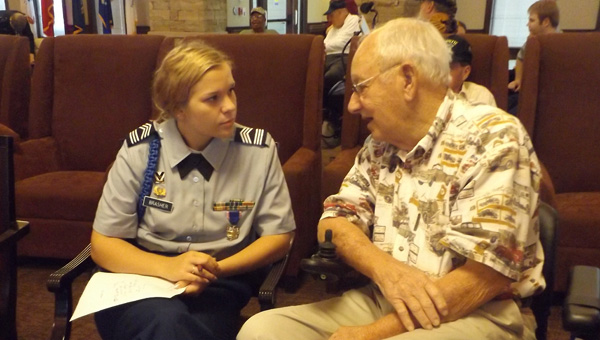 Cadet Riley Brasher of Vincent High School JROTC program listens intently to Army veteran Howell Dulaney, who shares his experiences in WWII about landing on Utah Beach on D-Day and fighting in Gen. George Patton’s Third Army during the Battle of the Bulge. (Contributed)

The Vincent JROTC has 157 cadets enrolled in the program, 64 percent of the student population. All freshmen are required to take JROTC their fall semester, which fulfils state mandated Character Ed instruction.

“We view mandatory 1st semester enrollment as a huge positive, and so do our administrators,” said Murrell. “Perhaps the biggest advantage is that kids who would have never considered JROTC find out it is fun and stick around. We try to offer something for everybody: Drill, Raider, Rifle, Academic and leadership Teams; Color Guard; Military ball; white water rafting, adventure trips, attend baseball games and community service activities. We do everything possible to make the program challenging but enjoyable for as many students as possible.”

“Mr. Dulaney tried to join the Army at age 16 as one of 14 children living on the family farm,” said Brasher. “He was not accepted initially due to age. He was then drafted at age 19, and served in the Army as a combat engineer from June 1942 until November 1945.

“He landed on Utah beach on D-Day and fought in France, Belgium and Germany. Mr. Dulaney fought under Gen. George Patton’s Third Army during the battle of the Bulge. He helped build bridges across the rivers as the lead U.S. units advanced into Germany, including the first bridge across the Rhine River. After WWII, he returned to Fort McClellan, Alabama, and then earned an electrical engineering degree and went to work for Alabama Power for the next 40 years.

“Interviewing Mr. Dulaney truly inspired me more than I could imagine,” Brasher added. “Talking to him and hearing his stories about battles, wars and service in other countries, and his personal life has given me an insight to a great figure who served for me and my country. I greatly respect and wish the best for him.”

The Vietnam 50th Commemorative Ride to honor and thank veterans, POWs and MIAs of the Vietnam War for their service... read more