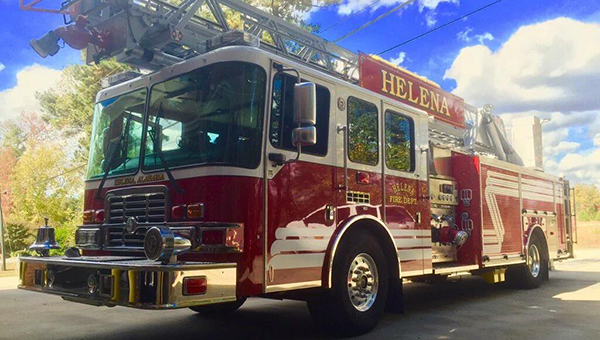 HELENA–The Helena Fire Department recently received a new ladder truck that was added to their fleet as the Helena City Council approved funding for the new truck a few months ago totaling $650,000.

Approximately $525,000 of the $650,000 approved went towards the purchase of the new ladder and pump demo fire truck that the HFD found at a significantly reduced price.

The fire truck is essentially brand new and only has a few thousand miles on it from driving it to different cities and fire departments as a demo.

Because of this, the out the door cost of the truck was $525,000 as opposed to upwards of $700,000 for a new truck. Helena Mayor Mark Hall and Helena Fire Chief John Wilder both agreed that the price was too hard to pass up and the new ladder truck was sorely needed to replace the aging 1993 model.

“Well, our ladder truck right now is a 1993 model and we’re pushing the limit on all of our apparatus so this is the most critical piece of equipment we needed to replace right now,” Hall said months earlier. “We looked at the basic quint truck replacement to keep us in good standing with ISO and all those good things and we have the money issue satisfied. The chief and his guys that are here tonight started looking around at different options on trucks but this one kind of fell in our laps and is an incredible opportunity we got here so we got to move fast. We got a demo quint truck we can get under the state bid laws and configuration for $525,000.”

Wilder provided a fact sheet of the potential quint fire truck the city purchased and it is a 2013 demo model that includes a 78 foot single axle aerial, 2000 GPM side mount pump with a side stack hose and stainless body.

Helena Councilwoman Leslie Bartlett questioned the need for a ladder truck versus a regular truck and Hall pointed to the new high school as reason for purchasing a ladder truck.

“Right now just the high school itself I think is demand for that ladder truck if you think about a fire there,” said Hall. “Fire protection is absolutely, if not one of the most important things we do for our citizens and that’s a no brainer.”

Wilder said that the $525,000 going toward the purchase of the new quint truck would also include full warranties with everything including graphics for the truck.

The HFD has already begun training on the new 78 foot ladder truck.