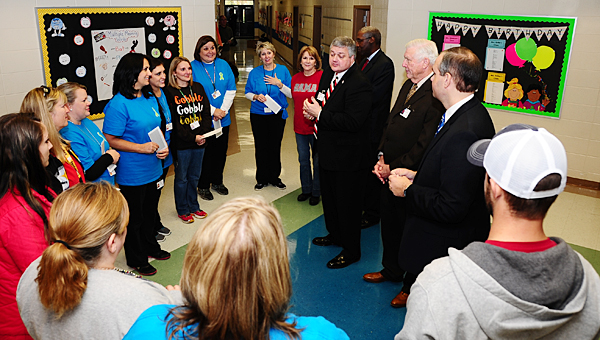 After Alabaster School Superintendent Dr. Wayne Vickers explained why they were there, several of Turner’s fellow teachers joined in emotional embraces.

“On behalf of the Alabaster City School System, I would like to present you with this extraordinary compensation,” Vickers told the teachers gathered in the CVES first-grade hallway. “We appreciate everything you do for the children of Alabaster.”

The visit to Creek View marked the final stop in a long – but happy – day for Vickers, some members of the Board of Education and central office staff members. From 7:45 a.m. until about 2:30, the group made its rounds to every school to hand-deliver “extraordinary compensation” checks to reward each school’s faculty and support staff. 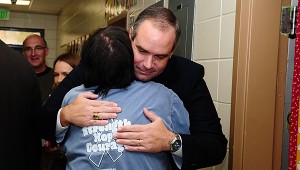 For Turner, it was a welcome surprise.

“I had no idea,” Turner said, noting she planned to use the money to support her son living in New York. “I thought it was just a one-time deal last year.”

Shortly after Turner and her fellow first-grade teachers received their surprise, one of Turner’s students, Mary Margaret Strange, planned an impromptu celebration for their teacher.

“What is that, Mrs. Turner?” Strange asked her teacher.

A few minutes later, when Turner walked back into her room, all of her students jumped from underneath a greet Turner with a loud “Happy Thanksgiving!”

“Last year blew us away,” McKay said. “You don’t want to expect it every year, and I definitely didn’t expect it so soon.”

“Wow!” Workman added as she unsealed her check.

Vickers and School Board member Derek Henderson said they were happy to surprise the teachers for a second year.

“We are so proud of our teachers and support staff, and we want them to know how much we appreciate them,” Vickers said.

“It was so wonderful last year, and we are glad to be able to do it again,” Henderson said.