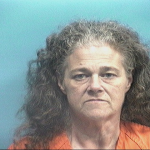 The Alabaster Police Department arrested Clara Nanette Owens, who lists an address on Cullman County 1078 in Vinemont, on Nov. 17 and charged her with one felony count of financial exploitation of an elderly person and four counts of fraudulent use of a debit or credit card.

According to Alabaster Police Department Lt. Grant Humphries, the charges came after the department began investigating several fraudulent credit card charges made at stores in the city between June 3-23.

After looking into the charges, APD investigators determined Owens allegedly was using a 90-year-old man’s credit card to make personal purchases without authorization. Owens was the victim’s caregiver, Humphries said.

“Basically, the financial exploitation of an elderly person charge applies to any victims who are 60 or older,” Humphries said.

Financial exploitation of an elderly person and fraudulent use of a credit or debit card are Class C felonies, according to Alabama law. Class C felonies carry a maximum sentence of 10 years in prison per charge upon conviction.

Owens is scheduled to appear in Shelby County District Court at 8:30 a.m. on Dec. 10 for a preliminary hearing, according to court records.