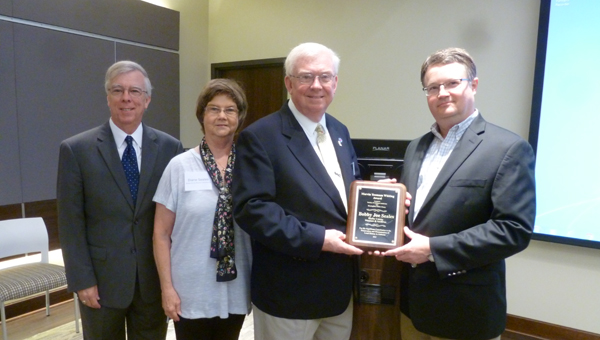 Bobby Joe Seales won the Marvin Yeomans Whiting Award, the highest award given by the Society of Alabama Archivists. Pictured are Dr. Fred Olive, president of the Shelby County Historical Society, Diane and Bobby Joe Seales, and Jim Baggett, head of the Department of Archives and Manuscripts at the Birmingham Public Library. (Contributed)

The Whiting award was presented to him by Jim Baggett, head of the Department of Archives and Manuscripts at the Birmingham Public Library on Oct. 16.

“There was a fine group of applicants this year, but one stood out, Bobby Joe Seales,” said Baggett. “Seales has been president of the Shelby County Historical Society for the last 16 years and has seen the society grow from 200 to almost 1,000 members. He is also executive director of the Shelby County Museum and Archives, one of the finest county museums in Alabama.”

The award is “given each year to an individual, organization, or institution that has made a significant contribution to the preservation and dissemination of local history in Alabama. The award recognizes the preservation of historic documents and oral history, but not buildings, artifacts or historic sites,” according to Alarchivists.org. “Marvin Yeomans Whiting was the Birmingham Public Library’s first archivists (1976-1996), a founding member of the Society of Alabama Archivists and a pioneer in the professionalization of archives in Alabama. The Birmingham Public Library co-sponsors the awards.”

Seales has spent his life preserving the history of Shelby County and recently retired from both leadership positions on the society and museum on Nov. 1 during Bobby Joe Seales Day, declared by Columbiana Mayor Stancil Handley, who wrote one of the letters of recommendation for the award.

Other letters were written by Dr. Fred Olive, current president of the society, and Clem Muck, LDS and society board member.

Seales was awarded the ASDAR Community Service Award in 2014, current member of the Alabama Bicentennial Commission, immediate past president of the Alabama Sons of the American Revolution, current SAR National Trustee, charter president of SAR Cahaba-Coosa Chapter, recipient of the SAR Good Citizenship medal and host of the Shelby County GenWeb project, Rootsweb.ancestry.comn/~alshelby.