Hannah Hall is a junior at Chelsea High School and went on a once-in-a-lifetime trip with fellow Advanced Placement U.S. History students. 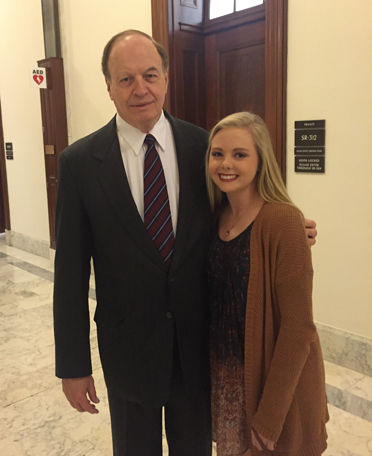 Hannah Hall, a junior at Chelsea High School, met with Sen. Richard Shelby, who was a childhood neighbor of her grandfather, Fred Hall, during a school trip to Washington, D.C. Also, her Uncle Stewart Hall was Shelby’s legislative director for five years in the 1990s. (Contributed)

The class, taught by Walter Ryan Adams, planned the weeklong trip in November 2015.

Adams had been on a similar trip while he was a student, and he wanted his students to have a similar experience.

Hall is the daughter of Charlie and Stacey Hall of Chelsea, granddaughter of Jeff and Zela Cates, Fred and Beverly Hall (past principal of Shelby County High School), and great-granddaughter of Jackie Cates, all of Columbiana.

She is a member of the National Honor Society, Beta Club and is a peer helper to special needs students. She also loves to dance.

The eight Chelsea AP students met with other students from Oklahoma, Idaho, Utah, Wyoming, Missouri and Michigan, who were all part of the Close Up weeklong seminar which focused on political issues.

Each day, students were divided into three different workshops, 20 students each.

The students debated and also participated in a mock congress.

They also traveled to Williamsburg, the Pentagon, and saw an interactive play at the John F. Kennedy Center.

They visited the Capital, where Hall and students met with Sen. Richard Shelby and a representative from Sen. Jeff Sessions’s staff.

They met with Congressman Gary Palmer who arranged a tour of the Capitol via the underground tunnel and a visit for the students to sit in the gallery.

“It was a wonderful, educational trip,” said Hall. “The most interesting part was the mock congress, and I especially enjoyed meeting students with different cultural experiences from my own. I learned about racial profiling, something I knew nothing about. It was so exciting to meet with Sen. Shelby, who grew up with my grandfather, Fred Hall, and Rep. Palme,r who arranged us to sit in the gallery.”