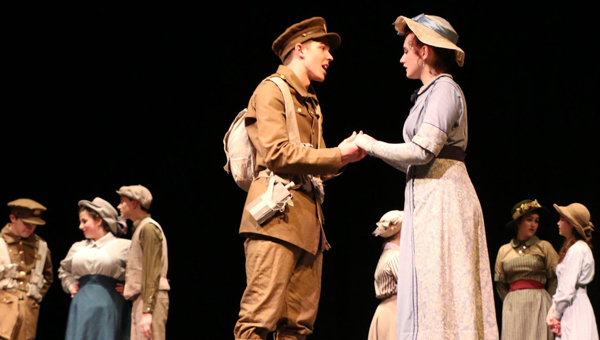 HOOVER—With a state contender football team and a regional qualifier robotics team, Spain Park High School has no shortage of talent, and the theatre troupe is no exception.

From Dec. 3-5, the Spain Park Theatre Troupe competed against 85 other high schools at the Walter F. Trumbauer State Secondary Theatre Festival at Troy University. The troupe walked away with three first place, one second place and three third place individual awards, and for the fourth year in a row, the troupe was named “Best in Show” for its original one-act play, “Pals.”

Spain Park was one of three high schools to present their own one-act play at the Walter F. Trumbauer Festival. “Pals” is based off the Leeds Pals, a group of World War I English soldiers.

“We found some letters written by soldiers in the First World War,” Spain Park theatre teacher Eric St. John said. “We had letters and we started constructing this story.” 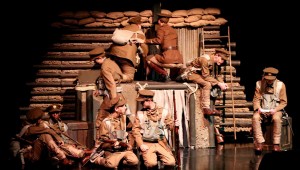 The production drew on the students’ many talents, from writing, to makeup, to set and sound design.

“I have kids who are into makeup, into costuming and into the technical aspects of theatre,” St. John said. “I let them do the work, I’m just here to help them when they need it.”

The students did extensive research to create an accurate production. Costumes were hand-sewn, the set was student-built and senior Cassie Johnson handled sound design. The actors even learned to speak in an accent authentic to Leeds.

“I would actually go to bed every night listening to (a recording of the accent),” Senior Charlotte McCreary said. “I really love working with accents.”

But creating the play is only half the battle. At competition, students are presented with a blank stage. They must set up, perform and deconstruct their one-act production in 45 minutes.

“I think they did a fantastic job with it,” St. John said, noting the students’ connection to the original production. “I think (creating an original piece) challenges students more, it brings in a whole new level.”

The students weren’t the only ones honored at the Walter F. Trumbauer Festival, the Alabama Conference of Theatre named St. John the Secondary Teacher of the Year.

Spain Park’s showing at the Walter F. Trumbauer Festival qualified the team to represent Alabama at the regional level, however they declined. Instead, the Spain Park Theatre Troupe is hoping to take “Pals” to the Atlanta Fringe Festival this summer.

“Fringe theatre is usually a showcase for original works and new works,” St. John said. “We had a great experience last time we went.”

The Walter F. Traumbauer competition was just the beginning for the Spain Park Theatre Troupe. The students are busily practicing for their next production, Shakespeare’s “As You Like It.” The group will perform the play at the State Thespian Convention at the end of January.