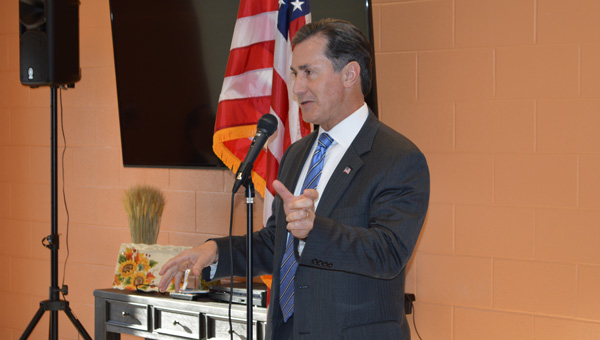 Congressman Gary Palmer speaks at an “Eggs and Issues” breakfast hosted by the chambers of commerce in Shelby County. (Reporter photo / Jessa Pease)

CHELSEA— At the “Eggs and Issues” breakfast hosted by the Calera, Montevallo, South Shelby and Greater Shelby chambers of commerce, Congressman Gary Palmer updated members on the state of Washington. While he discussed many issues, such as immigration reform, social security and the resources of the country, the major issues Palmer focused on were the United States budget and regulations. The budget committee has been meeting every day to hash out a budget, which should be out by April 28, according to Palmer. What they are up against, he said, is the bipartisan budget agreement, which broke the caps on discretionary spending. He explained that the country just hit $19 trillion in debt, and the projected economic growth has decreased from 2.3 percent to 2.1 percent. “(Growth of) 2.3 percent is not good. That’s almost a stagnant economy,” Palmer said. “Historically, our economy has grown at 3 percent or higher. When they lowered that projection for economic growth from 2.3 to 2.1 percent, that increased their projection for our debt by another $1.5 trillion.” In the next 10 years, Palmer said the debt is projected to increase to $28 trillion. As a member of the House Freedom Caucus, Palmer told the attendees that they had been discussing ways to address this issue. “We’ve laid out some things that we think we’ve got to do….I’m going to tell you right now that we are going to have to make some sacrifices,” he said. One of the things Palmer suggested is requiring every federal agency to go to zero-based budgeting versus projecting an additional 10 to 15 percent from the previous year. Every agency needs to justify their budget, Palmer said. He also discussed creating a proration rule to force fiscal discipline with a provision for emergencies worked it and reforming programs, such as Welfare, with work requirements to improve outcomes. “The American people need to know that we are serious about getting our fiscal house in order,” Palmer said. Implementing “reasonable regulations” was another topic Palmer focused on, describing the regulations in the country as “crushing” to entrepreneurship. Everything has regulatory costs, and while Palmer said he is not for deregulating everything, he is for implementing regulations a business owner can understand. “What we have are regulations that are duplicable,” he said. “We’ve got regulations that are obsolete.” He said if a business owner goes to a regulator and asks how to comply, a few months later the owner would get a different response from the same agency. The Unites States is 12th in the world in entrepreneurship, according to Palmer. Prior to 2008, there were about 100,000 more companies starting up than there were closing in a year, he said. From 2008 to today, Palmer said there are an average of 70,000 more businesses closing than starting up a year. Palmer suggested approaching the issue through a series of task forces to work with different industries and simplify regulations. If the United States could reduce regulatory costs by 20 percent, it would put $400 billion a year back into the economy. “We need to raise our expectations of each other as a Republican conference,” Palmer said. “We need to hold one another accountable. Once we establish our expectations of ourselves, of what we need to do, we need to tell the American people what to expect from us.”