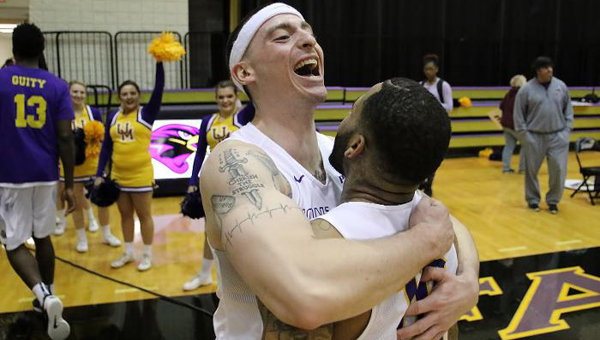 Logan Kelley celebrates with Kevin Kelly after Montevallo came back from down 13 points in the second half to beat Armstrong State in the PBC quarterfinals. (Contributed)

MONTEVALLO – Montevallo overcame a 13-point deficit in the second half on its way to a 76-71 comeback victory against Armstrong State in the quarterfinals of the Peach Belt Conference Tournament at Trustmark Arena.

The Falcons, the No. 2 seed in the West Division, took the lead over the East No. 3 seed Pirates for good on a pair of free throws by senior Terrell Lipkins with 14 seconds remaining in the game.

Armstrong State started off the contest on fire from beyond the arc, with Nick Scott draining a 3-pointer with 16:58 remaining in the first half to cap an 8-0 run by the Pirates to open the game.

Montevallo responded with a 16-6 run and took its first lead on a layup by junior Kevin Kelly with 11:54 remaining in the opening half.

A three-pointer by Lipkins with 6:36 remaining in the first half gave the Falcons a 25-24 advantage before Armstrong State closed the half with a 8-3 run as the Pirates carried a 32-28 lead into the locker room at halftime.

Armstrong State opened the second half with 12-2 run to open up a 42-30 lead following three-pointer by Nick Scott with 16:08 remaining in the game.

A three by the Pirates’ Shema Sabiiti with 10:04 remaining in the game gave Armstrong State a 57-44 advantage, marking its largest lead in the contest.

A three-point play by senior Malik Fields sparked a 10-0 run by the Falcons, capped with a jumper by senior Tevin Worthy with 7:45 left in the game.

The Falcons took their first lead in the second half on a layup from Fields with 1:33 remaining, which gave Montevallo a 67-65 advantage. Scott and Lipkins traded threes over the next minute before a three-pointer by the Pirates’ Loren Hall with 18 seconds remaining gave Armstrong State a 71-70 lead.

Lipkins made a pair of free throws with 14 seconds remaining to give Montevallo a 72-71 advantage. The Falcons fouled Hall as the Pirates inbounded the basketball and Hall missed both attempts at the charity stripe.

Sophomore Vaughn Autryand Lipkins each knocked down a pair of free throws in the final 11 seconds to help Montevallo secure the come-from-behind victory.

STAT OF THE GAME

Kelly tied his career high with 15 points on 7-of-13 shooting from the floor in the win over the Pirates.

Fields tied his career high with nine made field goals as he scored 22 points on 9-of-10 shooting from the floor and 4-of-6 shooting at the charity stripe in the win over Armstrong State.

Lipkins finished 5-of-7 from beyond the arc in the victory over Armstrong State, marking the seventh time this season Lipkins made at least five three-pointers in a game.

The Falcons will take on East No. 1 seed Lander University in the Peach Belt Conference Tournament semifinals Saturday, March 5. The semifinals and championship game will be held at the site of the highest remaining seed in the West Division in the women’s bracket.

Tip off in the contest between the Falcons and the Bearcats is set for 3:30 p.m. Eastern/2:30 p.m. Central.