The Petal Cart expands to include real flowers 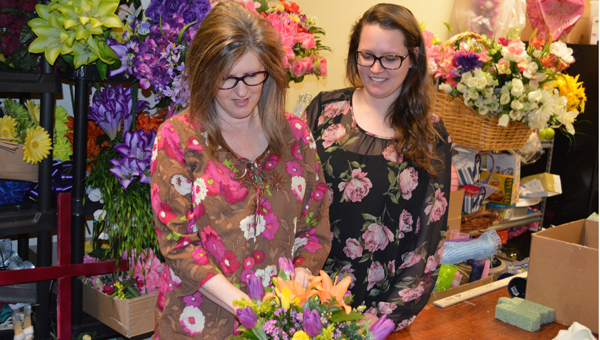 Leelee Gaissert creates an arrangement at The Petal Cart in Pelham, a business she owns with her daughter Kayla Ellis. (Reporter photo/Jessa Pease)

PELHAM— Less than a year after opening in Pelham, The Petal Cart has expanded its business to include real flower arrangements in addition to its original silk flower ones.

“It’s been really good,” said owner Leelee Gaissert. “I wish we would have starting doing (real flowers) along with everything else, but we didn’t know. That really wasn’t what we planned on doing.”

Gaissert owns and runs The Petal Cart with her daughter, Kayla Ellis. They both said people were continuously walking in or calling the store asking about real flowers. Eventually, the duo decided to delve into the idea.

About two weeks prior to Valentine’s Day, The Petal Cart started offering real flower arrangements in addition to the custom silk floral designs. Since then, Gaissert has created several funeral wreaths, corsages for different events, arrangements for special events and more.

Gaissert started creating silk flower arrangements about five years ago as a hobby, and said she was a little nervous transitioning into real flowers at first. To her surprise, it wasn’t as difficult as she thought.

“It hasn’t been very hard,” she laughed. “You just use different foam, and, of course, there are different techniques from using real flowers to the silks.”

Ellis said it’s been a fun adventure transitioning into the real flower business, and there have been many memorable moments, such as a father purchasing a single rose for his daughter on Valentine’s Day.

With both the silk and real flower sales, Gaissert said there are some days when she never stops moving, but overall she enjoys creating the real flower arrangements.

Now the mother-daughter team is just excited to see what the future has in store for The Petal Cart.

“It was unexpected, so it’s cool to see,” Ellis said. “The silk flowers are still there, but the real flowers are really where (interest) is at.”

The Petal Cart is located at 136 Bowling Lane near the McAlister’s Deli. For more information or to order a custom arrangement, call 624-4333 or visit Facebook.com/thepetalcart.