PROFILE: Breaking the story: Donna Francavilla paves her own way in the business news world 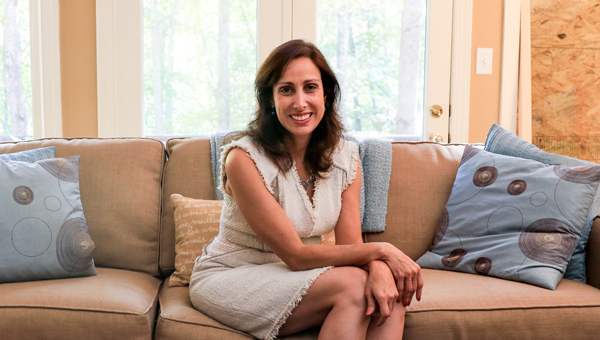 Donna Francavilla has earned numerous awards and recognition for her skill as a reporter. (For the Reporter / Dawn Harrison)

Donna Francavilla vividly remembers the first time she was told she would never have a career in journalism.

“At KYW one of the male news anchors told me, ‘You’re probably just going to get married and have a child,’” Francavilla recalled. “That was the expectation.”

Now, several cities, many breaking stories and countless awards later, Francavilla has clearly proven this anchor wrong. Francavilla has reported across the east coast, and even from abroad, and her voice is recognizable to any Birmigham-area radio listener. However her journey to success was not an easy one.

Francavilla was born in Camden, N.J., the fourth and last child of two first-generation Italian immigrants. Francavilla’s mother had the equivalent of a fifth grade education, and she and her siblings were the first in their family to go to college.

As a high school senior, Francavilla was excitedly looking forward to leaving Camden and pursuing journalism with a full ride scholarship to Tulane University in New Orleans. But this dream ended before it began.

Francavilla’s father was shot in the leg during a mugging while visiting the school. Although he survived, Francavilla’s parents deemed the city too dangerous for their daughter.

Instead, Francavilla enrolled at Rutgers University in her home state of New Jersey. She lived at home and was driven to class everyday by her father.

Although Rutgers didn’t offer a journalism major, Francavilla pieced together classes she felt would give her the knowledge she needed for her dream career, including history, sociology and political science. And without a full scholarship, Francavilla worked to pay for her education. 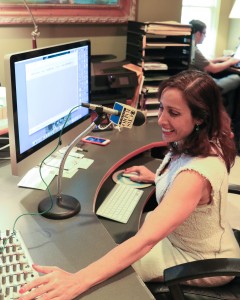 Donna Francavilla records stories from her home studio and sends them to the CBS corporate office in New York City, then the story is broadcast across more than 400 CBS stations throughout the country. (For the Reporter / Dawn Harrison)

During her time at Rutgers Francavilla got her first taste of the radio newsroom as an intern at WWDB, the only FM talk news station in neighboring Philadelphia in the 1970s.

Francavilla worked whenever she could, filling in for producers when they were away or out sick. Her dedication to the job paid off, after two semesters of interning for free, she was hired by WWDB.

“I got to work with some of the legends,” Francavilla reminisced. “To meet them in person was so empowering and fun.”

Francavilla’s next stop was the Philadelphia-based station, KYW, at the suggestion of her Rutgers professor, Frank Hall. At the time, KYW was the most listened to all-news station in the country, Francavilla said.

Just days into her new job at KYW, Francavilla was thrust into the world of breaking news. On March 30, 1981, an assassination attempt was made on President Ronald Reagan.

“I cleared the wire, ran it past the editor’s desk and he said ‘Here, run it to the anchor,’” Francavilla recounted. “I remember the pandemonium in the newsroom, how it came alive and how I was an eyewitness to history, and I was hooked again.”

As a junior in college, just a year away from graduating, Francavilla got married, had a son and moved to Boston. But even with the challenges of a new city and the responsibilities of motherhood, she never lost sight of her career goals. She promptly enrolled at Emerson College.

“I hated that I did exactly what (the KYW anchor) said, but I did not drop out of school,” Francavilla said. “I was determined to do whatever it took to get through school and get my degree. I came from an immigrant family, and education is paramount.”

Francavilla also did not stop working. While at Emerson, she took a job at Boston’s news talk radio station, WRKO.

Life as a student, radio journalist and new mother was not easy, but Francavilla persevered and completed her degree.

“My baby was 2-and-a-half when I graduated,” Francavilla said.

By the time she graduated from college, Francavilla had experience at three major radio stations, but the challenges were not over. Being a woman in the male-dominated world of business news broadcasting in the 1980s a tall order.

“It was still very much a man’s world,” Francvilla said. “Back then, women were just starting to make headway. You had to prove yourself.”

A ‘go-getter’ in a world of go-getters

The news industry is tough and competition is fierce. It requires initiative and drive to find the important stories, persistence to get the facts and quick thinking to develop breaking news.

“It’s pretty demanding,” Harvey Nagler, vice president of CBS Radio and Francavilla’s longtime colleague and friend, said of the field. “(Francavilla) does a really good job of thinking on her feet and always making sure she’s a credible reporter.”

Time and again, Francavilla has proved herself in the news industry from Boston to Birmingham through her talent, integrity and smarts.

“She’s extraordinarily talented,” Nagler said. “Her success lies in her overall humanity, how she treats people with respect, yet at the same time she’s a leader… I can’t say enough nice things about her as a reporter and as a person.”

In this fast-paced world of breaking news, Francavilla has made a name for herself as a go-getter, finding and covering the big stories and securing the big interviews, such as Donald Trump and Rev. Jesse Jackson.

Francavilla solidified this reputation during her years as a radio broadcaster and news director at WPGC Business Radio Network in Washington, D.C.

“I interviewed Donald Trump, he was in Washington, D.C., to tout his new hotel, and I wanted publicity for the radio station,” Francavilla recalled.

Francavilla remembers approaching Trump and slipping him a note to read during a press conference. Trump looked down at the paper, then read clearly into the microphone, “Hi, this is Don Trump, and when I’m in Washington, I listen to WPGC All Business Radio 1580 AM.”

“It was written about,” Francavilla said. “It gave me a reputation as a go-getter in journalism.”

Francavilla has also never shied away from getting in the action to get a story. She has covered a plethora of natural disasters, from flooding in Peru, to tornados, to Hurricane Katrina.

“Katrina was really scary,” Francavilla said. “In a disaster, people become very insecure and afraid, and that makes them very dangerous.”

Francavilla was dispatched to Pascagoula and Biloxi, Miss., to cover the aftermath of the hurricane. While there, she drove through some of the most devastated areas to expose the true impact of the storm.

“I went by myself, and the sun was beginning to set,” Francavilla said, recalling the scenes of destruction and the feeling of unease and fear while driving through an unfamiliar place. “It wasn’t for wimps.”

In the case of a big or unexpected event, CBS often calls on Francavilla to cover it. In the past few months alone, she covered Pope Francis’s first visit to the United States and the federal trial over police use of pepper spray in schools.

Francavilla records the stories in her home studio, then sends them to Nagler at the CBS headquarters in New York City. From there, Francavilla’s voice is broadcast over 400 stations across the country.

When she’s not out covering stories for CBS, Francavilla can be found immersed in research for her position as the Italy chairman of the Birmingham Sister Cities Project or donating her time to her church, St. Mark the Evangelist Parish.

“At church, she’s really involved with a lot of ministries,” Robert Sbrissa, a fellow member of St. Mark’s, said.

Sbrissa approached Francavilla several years ago to see if she’d be willing to help him put on the annual Feast of St. Mark Italian Food Festival.

“She jumped on board right away,” Sbrissa said. “The feast, in particular, is something she’s quite connected to on a personal level.”

Francavilla lent her skills, honed in the news world, to the event. Sbrissa estimated she put in more than 10 hours each week recording and coordinating advertising, and creating news releases to promote the event.

Francavilla’s perseverance, skill and go-getter work ethic that earned her success in the news industry carry over into all she is involved in.