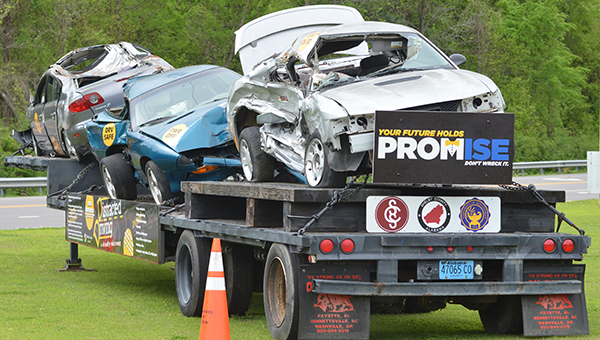 A tractor trailer with wrecked cars due to distracted and buzzed driving sits outside of Helena High School to remind students of the possible consequences they may face if they drink and drive. (Reporter Photo/Graham Brooks)

Jimmy Crane spoke at an assembly at Helena High School on Friday, April 15. Crane lost his son to a drug overdose and read a portion of his son’s eulogy to students. (Reporter Photo/Graham Brooks)

The story was told by speaker Jimmy Crane, as hundreds of students gathered in the school’s gymnasium to hear an uncensored story on the dangerous effects of drugs and alcohol and how one bad decision could lead to life-altering consequences or even death.

On Feb. 11, 2011, Crane unfortunately lost his 21-year-old son Taylor to an accidental drug overdose due to the combined toxic effects of hydrocodone, Xanax and tramadol.

“On Feb. 6 we had gone to church that morning and came home and were getting ready to go out to run some errands that afternoon,” said Jimmy. “A reverend from church came pulling up and delivered the news that our oldest and only son Taylor was dead.”

Jimmy described Taylor, a 2008 Oak Mountain High School graduate, as a good student, successful athlete and as someone who never caused trouble, but made one wrong decision that cost him his life.

Jimmy brought with him the eulogy from Taylor’s funeral and the actual autopsy report listing Taylor’s cause of death and read it to the HHS students. The report is a document Jimmy said he hasn’t looked at in close to three years because it felt like reliving the day all over again.

“This is very serious,” said Jimmy. “I took time off from work today because I don’t want to see anybody else, another young person or another parent have to go through what we had to go through.”

A few years after Taylor’s death, the Crane family had another setback in the form of the pain Jimmy was feeling inside and how he chose to cope with it.

“We buried Taylor on a Thursday and for the next year when people would ask me how I was doing I would say ‘I’m fine, good’ and I barely even cried at the funeral,” said Jimmy, “But inside, I was angry, mad and I would go to the grave and I would shake my fist in the air and I would think, ‘I’ll never see him graduate college, never be a best man in his wedding and I’m never going to hold my first grandchild.’”

On the day of what would’ve been the celebration of Taylor’s birthday, Jimmy said he couldn’t take the pain anymore as he would drive past the cemetery where Taylor was buried each day driving to work.

“On that fateful day of his birthday, I stole drugs from the pharmacy and went to the grave and walked up and shook my fist in the air and took the drug to relieve my emotional pain,” said Jimmy. “Four short months after that, I was coming home from work on Caldwell Mill Road and there again I didn’t have a seat belt on, driving too fast and I was buzzed, I wasn’t out of it or blackout I was buzzed. I remember the drive very well and on the way home, two miles from my house, I came over a hill and saw the tail lights of a car stopped and there was nowhere for me to go, and I plowed in to the back of that car going 60 miles per hour. I went through the windshield and nearly killed two people.”

Jimmy described the consequences that followed the accident that included being charged with two felony charges of assault and possession of a controlled substance and two misdemeanors, surrendering his pharmacy license to the board of pharmacy until he got treatment, where he spent three months, being in a halfway house all while dealing with court and legal ramifications.

Luckily for Jimmy, the couple that he hit made a full recovery and, as Jimmy said, have “miraculously forgiven me.”

Today, Jimmy said he would continue to travel and share his stories with students to try and prevent more senseless tragedies from happening and to hopefully open the eyes and bring awareness to drug and alcohol abuse problems.

Toward the end of the assembly, Jimmy simply said that it all comes down to making choices.

“I began to ask myself all sorts of questions, I could’ve been a better father, should’ve done this, should’ve done that but the reality is he was 21 years old and he made his own choice,” said Jimmy. “Each one of you are going to have a choice in the future whether it’s now, in college or whenever. Statistics show that it does not end well for most people who start drinking and using drugs in high school.”