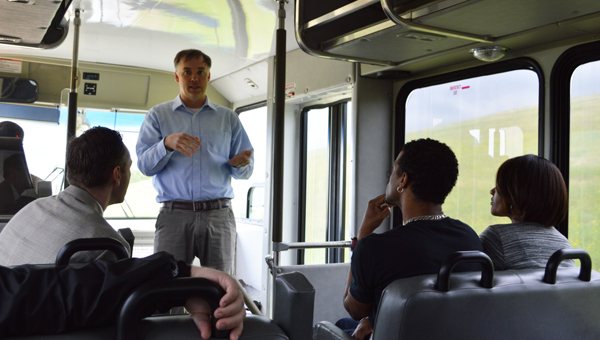 He said the regional landfill grosses about $4 million a year, and about 92 percent of the trash comes directly from Shelby County. It was also named the No. 1 landfill relative to municipal solid waste by the Alabama Department for Environmental Management in 2015.

“It was designed for Shelby County for the Shelby County residents,” Scroggins said. “The reason is the household garbage rates, they may not be the cheapest in the state, but they are very close.”

The landfill sees about 180,000 tons of garbage a year, which translates into about 500 tons a day. There are two types of materials dumped at the landfill: Construction and Demolition debris and household garbage.

Of the 396 acres of the landfill, Scroggins said only 150 have been developed in the past 30 years.

The household side of the landfill is also the site of an upcoming project. Scroggins said the cells used for household trash are covered daily and begins to produce landfill gas.

This collection of methane is the start of a $1.1 million project, according to Scroggins, and they’ve already started the bidding process.

“We’ve got enough gas production to turn a 1.6 megawatt generator, which would fuel two to three hundred homes,” he said.

Shelby County Environmental Services is responsible for the daily operations, construction and maintenance of the Shelby County Regional Landfill. The landfill accepts trash, garbage and debris Monday through Saturday from commercial waste haulers and the general public.

OMES third grader Leslie Ann reads her poem “Once I Heard” during the Poetry Cafe held in the school library... read more