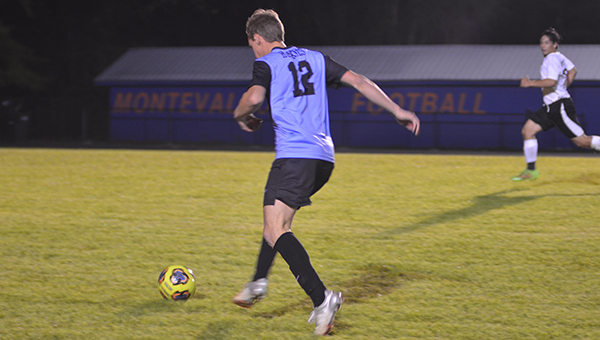 The Helena Huskies boys soccer team took back the No. 1 spot in the Class 4A-5A rankings with an overall record of 10-6-2. (Reporter Photo/Graham Brooks)

HELENA–The latest Class 4A-5A soccer rankings have been released and the Helena Huskies boys soccer team sits atop the poll, according to Eurosportscoreboard.com.

The Huskies have been at or near the top most of the season and currently sit at 10-6-2 overall, including a 3-0 record against Class 5A Section 7 competition.

In their last three area games, Helena has outscored Calera, Jemison and Montevallo by a combined score of 26-2.

The Huskies have had hard fought games against 6A opponents Pelham and Homewood in recent weeks, falling by scores of 3-2 and 2-0 respectively.

Helena will have a busy week beginning April 18, as the Huskies will play four games in five days, including three area opponents as well as 7A opponent Thompson.

Following Helena in the rankings at No. 2 is St. Paul’s, who defeated the Huskies in the semifinals last season. The Saints currently sport a 12-7-2 overall record this season.

Helena is led by head coach Zach Morgan, who is in his second season with the Huskies.

Other ranked Shelby County teams include No. 1 Oak Mountain, No. 5 Spain Park, No. 10 Thompson, No. 1 Indian Springs and No. 5 Pelham.