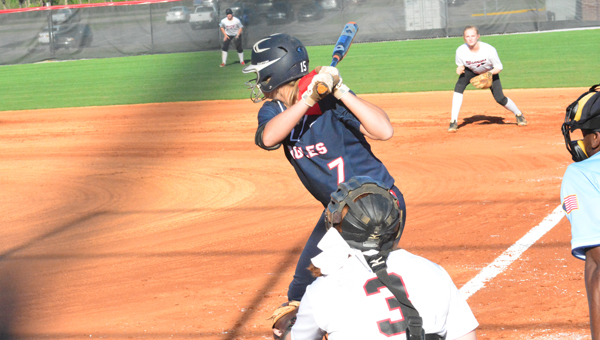 Carmyn Greenwood and the Oak Mountain Lady Eagles were 18-8 as of April 19 and in prime position to make a run in the 7A playoffs. (Reporter Photo / Baker Ellis)

NORTH SHELBY – Last year Oak Mountain’s softball team finished the season 14-16 and did not advance out of the area tournament for the second consecutive season. In 2013, the Lady Eagles came up one game short of snagging the second 6A bid out of the South Central region, which would have punched that team’s ticket to the state playoffs, however that is the farthest Oak Mountain has advanced on the softball field in recent memory. This season’s team however has the potential to break that streak. As of April 18, the Lady Eagles are 18-8 in 2016, averaging more than seven runs per game, hold the No. 8 ranking in class 7A and are one game away from clinching home field advantage in the area tournament. What has led this team’s resurgence from a year ago? Let’s find out.

For starters, this Oak Mountain team is under new management. Kaitlin Griffin took over as the Lady Eagles’ head softball coach in place of Kellie Eubanks in the offseason, and has been a shot in the arm for an Oak Mountain roster that only has three seniors. Griffin was the head coach at Mountain Brook for the last two years before taking the Oak Mountain job this year. She however attributes the boost in productivity and wins not to her coaching, but to the burgeoning confidence her players possess.

“It’s all just been about them having confidence,” Griffin said. “I think them seeing success against some pretty good teams this year, combined with the way they’re hitting, it just keeps growing their confidence. They’re a little underrated and I think that benefits us too.”

Through 26 games the Lady Eagles have hit 26 home runs, and as a team are hitting .375. They are averaging more than seven runs per game while giving up less than four, and have four hitters batting over .400. O’Neil Roberson, Carmyn Greenwood, Ashlee Sanders and Maddie Katona have led the Lady Eagles from the plate this season, and are some of the primary reasons why this Lady Eagles team is scoring nearly three runs more per game than they were a season ago.

Roberson and Greenwood in particular have been big from the plate, combining for 23 of the team’s 26 homers. Roberson, a junior Mississippi State commit, has 14 bombs, is batting an explosive .513 from the plate and has 47 RBIs through 26 games while Greenwood, a senior Auburn commit, has nine home runs, is batting .467 and has knocked in 32 runs as well. Sanders, another senior Mississippi State commit, is batting .439 and is a headache on the base paths, as she has stolen 17 bases and has never been picked off. Katona, just a freshman, is also batting .425 as well.

While the bats have been integral to the Lady Eagles’ success, the pitching has played just as integral of a role. Junior Abby Jones is 8-4 on the year while freshman Clara Fuller is 10-3 as of April 18. Fuller, as just a freshman, has been a pleasant surprise this season from the mound.

“At the beginning of the year we thought Ashlee (Sanders) would help us pitching-wise,” Griffin said. “But we really needed her to stay on the field defensively. We put Clara on the mound, and she’s been great ever since. Her and Abby really feed off each other. Our pitchers know too if our offense is scoring we’re going to win. They’re not worried that our team’s not going to come up and score.”

Oak Mountain is currently 4-1 in 7A Area 5 play and plays Hoover on April 19 at Hoover for a chance to lock up home field advantage. When talking about the postseason, Griffin said she has known all along that this team should be playing deep into the postseason, and wants to give her small senior class a proper sendoff.

“I knew from the beginning the potential this team and this program had,” Griffin said. “I think them just understanding that and putting it all together, that’s what’s been benefitting us. I told these kids that they should be playing in the postseason. This senior class has never been to the state tournament, and there’s no reason why they shouldn’t have.”