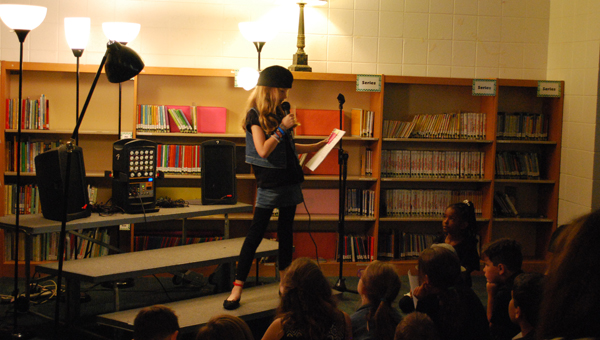 OMES third grader Leslie Ann reads her poem “Once I Heard” during the Poetry Cafe held in the school library on April 15. (Reporter Photo/Molly Davidson)

NORTH SHELBY—The lights dimmed in the Oak Mountain Elementary School library as third graders dressed in dark poet garb excitedly waited to share their writing with an audience of parents and friends at the Poetry Cafe on April 15.

The Poetry Cafe showcased the third graders’ accomplishments during their poetry unit with teacher Janet Butterfield. Two classes of students read their original poetry for their parents.

“All of them chose whatever they wanted to read today,” Butterfield said. “It’s all original.”

“I really wanted my parents to hear it, and it was my favorite one,” Leslie Ann said of her chosen poem.

Leslie Ann said she enjoys freeform poetry because it allows her to express whatever she’s feeling, but she said she also enjoys acrostic poems because of the way they look on paper.

“I wanted to show how important America is,” Jacob said of his poem.

The poems students read during the Poetry Cafe were the result of hard work in class.

Butterfield began the unit with a “poetry tasting” in the library. With the help of librarian Amy Hogan, students were introduced to a plethora of poems.

“They were just kicking back, reading poems,” Butterfield said. “It just opened up a new genre for them really.”

Students applied new techniques, devices and poetic styles to their work as they learned them. Throughout the unit, students completed a number of poems and had the opportunity to publish them, Butterfield said.

“They just took off,” Butterfield said. “We had a lot of fun with it.”

SPHS wraps up program series with painting at the library