ALABASTER – An 18-year-old Alabaster man is facing a gamut of felonies after allegedly breaking into nearly a dozen vehicles in the city and firing a handgun at a victim on April 17. 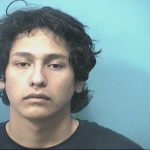 During the string of car break-ins, Cruz allegedly stole U.S. currency, speakers, a leather jacket, checks, personal documents, headphones and nail guns from a neighborhood off Kent Dairy Road and stole car keys from a residence off Second Avenue Southwest.

During the incident, Cruz allegedly discharged a handgun at one of the victims, resulting in the attempted murder charge.

Attempted murder is a Class A felony, and carries a maximum sentence of life in prison upon conviction. The unlawful breaking and entering a vehicle charges carry a maximum prison sentence of 10 years apiece.

Cruz currently is being held in the Shelby County Jail on bonds totaling $82,000.