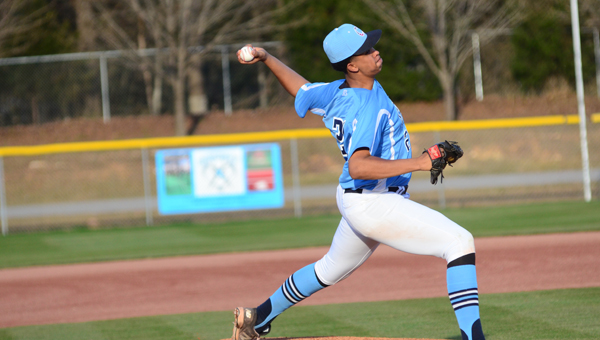 Jacob Smith and the Calera baseball Eagles went 22-10 in 2016, and will return a strong junior class as the Eagles look to make the playoffs. (File)

CALERA – Before this year, the last time the Calera baseball Eagles won 20 games in a season was in 2002, when that Calera team finished 20-12 and made an appearance in the 2A Final Four. Since then the Eagles have won a few area championships, but have generally struggled in the win-loss column. This year, Calera shot out to a 14-2 start and finished the season with a 22-10 record, beating Shelby County twice on April 18 in the Eagles’ final two games of the season to give Calera its best record in recent history.

While Calera finished the season with 22 wins, the Eagles did not qualify for postseason play. The Eagles played baseball this year in 5A Area 7 along with Helena, Jemison and Central-Tuscaloosa, and dropped both area games to 5A No. 3 Helena and Jemison as well, finishing the season third in the area with a 2-4 mark in area play.

“This was the toughest one since I’ve been here,” Calera head coach Seth Gandy said of the area this season. “Jemison had predominantly all seniors in their starting roster, (and) had two very good starting pitchers. Helena has an exceptional amount of talent as well. We went a little cold in area play.”

While the disappointment is obvious that the best product Calera has put on the field in over a decade did not make an appearance in the playoffs, Gandy is still proud of how his team performed and finished the year.

“Obviously we were disappointed in that aspect,” Gandy said. “But when we knew we were out of the playoffs we went 7-0 to end the year, so it meant something to the kids.”

This Calera team was marked by its large contributing sophomore class, and Gandy believes there is room to grow in the future. Jacob Smith, Kevin Dowdell, Austin McKinney, John Ellison, Tyler Oclair and Chris Mcgibboney make up the sophomore bunch that will look to step into larger leadership roles as juniors, and returning senior and leadoff hitter Will Glasscock will be the de facto leader of the 2017 team.

Matthew Marfice, Zach Gaines, Zach Harris and Tucker Dunkin will all graduate this spring and not return to the diamond next season. The four helped to jump-start Calera baseball, and will be remembered for the mark they left on the program.

“Just looking on the season, we had some key seniors and I feel like their legacy will be winning over 20 games and starting a new tradition. The future is bright,” Gandy said.