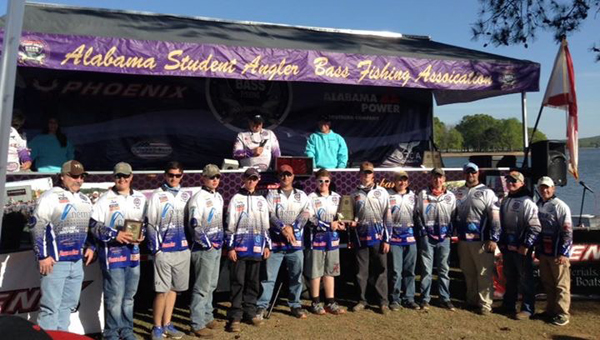 Members of the Chelsea Anglers state team display their awards from a regional tournament April 9 at Logan Martin Lake. (Contributed)

CHELSEA – Chelsea has a club for young people to join that enjoy bass fishing.

This club is called the Chelsea Anglers and consists of seventh-12th grade teen boys and girls that attend Chelsea Middle and High schools or home school.

The anglers compete in the fall using a point system, and the top 10 teens form a state team. 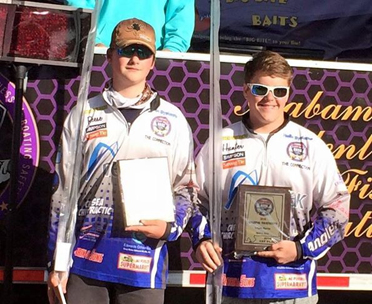 Reese Dennis and Hunter Gulledge display their first-place awards at the tournament. (Contributed)

Those five boats consist of two teens and an adult captain that compete against 60-plus teams throughout the state of Alabama during three spring fishing tournaments for the Alabama Student Angler Bass Fishing Association trail.

The bass are all caught with artificial bait and are kept alive until weigh-in and then released. Each boat can weigh a maximum of five fish.

On April 9, the Chelsea Anglers were in their third spring tournament at Logan Martin Lake.

This was a regional tournament that hosted around 190 boats.

This win is the first time in Chelsea Angler history that one of the group’s boats won first place.

Quintin Dorough and Zane Loveday came in sixth place with their fish weighing in at 15.75 pounds.
The Chelsea Anglers came in second place during this regional ASABFA tournament, ranking them in third place overall in the state.

For more information, visit the Chelsea Anglers on Facebook or follow the group on the ASABFA Facebook page on May 6-7 for the final two-day state tournament at Lake Neely Henry in Gadsden.