IES students ‘own their own learning’ 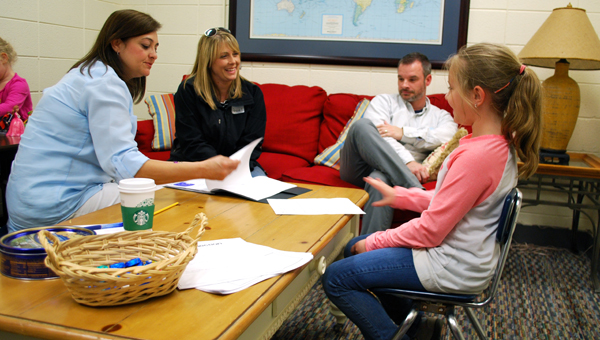 IES third grader Rylie Campbell shares her schoolwork and progress with her parents during a student-led conference on April 15. (Reporter Photo/Molly Davidson)

NORTH SHELBY—Parent conferences look a little different at Inverness Elementary School this year. Instead of including just parents and teachers, students play a central role in leading their conferences.

The new format for parent conferences allows students to take ownership of their learning and goals, and celebrates their progress, IES Assistant Principal Jeff Norris said.

“Students own their own learning and…their growth that they’re in charge of,” Norris said. “That’s a skill that you don’t often see in younger children.”

On April 15, third grader Rylie Campbell showed her parents, Brian and Stacey, a binder full of highlights from her first semester with teacher Michelle Price. The binder included samples of Rylie’s writing and math work and colorful graphs of her progress through the year.

The conference binder and progress graphs not only showed Rylie’s parents how she is doing, they also allowed Rylie to see how much she accomplished, Price said.

“We do so much. We are constantly growing, moving and changing so much,” Price said. “When (students) look at this, they say, ‘Wow!’”

During her conference, Rylie also shared her own learning goals and assigned her parents summer homework—quizzing her with flashcards to help her achieve her goals.

“Seeing elementary students filled with a sense of pride when they share their goals and accomplishments with their parents, or another adult, is remarkable,” IES Principal Christine Hoffman wrote. “Student-led conferences are a powerful way to strengthen the home-school connection. They also allow our students to practice the critical skills of effective oral and written communication and interpreting data.”

The school set an initial goal of 10 percent participation in student-led conferences, but Norris said teachers “embraced the idea” and around 70 percent of the school’s students led their own conferences.

Students, from kindergarteners to third graders, worked with their teachers to create a conference presentation centered on growth, progress and accomplishments.

“We want our students to share evidence that showcases their growth, which is our ultimate goal,” Norris wrote. “No matter where students begin, we know they have the potential to grow as learners. Having them self-reflect on their progress makes the hard work more meaningful and sets the tone for a life filled with learning.”

IES students aren’t the only ones leading their own conferences. Students across the Shelby County School System have taken control of their learning through student-led conferences this year as part of a system-wide initiative, SCS Professional Development Supervisor Angela Walker explained.

“In Shelby County, we are teaching our students to be ‘leaders of their own learning,’” Martin wrote. “We want them to be able to articulate their strengths and weaknesses as learners, set goals and make a plan to achieve their goals. This not only helps students academically and behaviorally, but builds soft skills needed to be successful in life.”