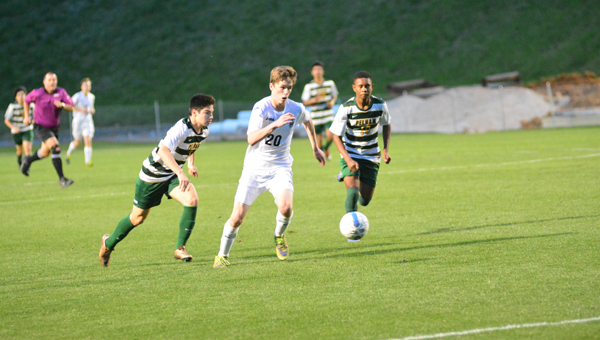 NORTH SHELBY – Both Briarwood and Pelham will send their boys’ soccer teams to the state tournament, and both had already locked up the two playoff berths out of 6A Area 10 before their final matchup on April 19. However, the game on April 19 still had high stakes, as the game’s winner became the de facto winner of the area, allowing them to host the first round of the playoffs. Pelham beat Briarwood in the first meeting of the season by a 3-2 final on April 9, but because Briarwood had a larger positive goal differential in area play than Pelham, thanks to its wins over Chelsea, the third team in 6A Area 10, all the Lions had to do was squeeze out a victory on their home field to get the area crown.

After a tense 80 minutes of fast-paced, physical soccer, Briarwood did just that, escaping with a 2-1 victory, buying themselves one more game at home.

“I don’t think there was a player on our team who believed we couldn’t win,” Briarwood head coach Shawn Brower said after the game. “Pelham is an extremely talented team. They’re highly skilled. For us to battle and compete the way we did, I just couldn’t be more proud of them.”

In the first 10 minutes of the first half, Briarwood was on the attack. Freshman striker Logan Frost in particular stretched the Pelham defense early, forcing Pelham keeper Seth Torman into action on a few occasions, and fellow freshman Sam Candler had a great look on goal in the 10th minute off a missed shot attempt from Frost, but sent the shot high.

After Pelham had settled into the game, their skill and savvy in the midfield began to show. The Panthers are not particularly big across the middle of the field, but their midfielders are adept with the ball at their feet and rarely make poor decisions in tight space, and the possession needle began to swing in their direction. However, they were unable to turn that possession into any positive looks on goal in the early going.

Briarwood focused their offensive efforts for most of the night on trying to play long balls from its own defensive third or the midfield over the heads of the Pelham defense into space for Frost or senior Josh Brower to run under for potential one-v-one chances on goal. In the 22nd minute the Lions got such a chance, as Frost took a pass from the midfield and ran on goal, getting a step on the Pelham back line and firing a winner into the back of the Pelham net to give the Lions an early 1-0 lead.

Braxton Jeffcoat scored the equalizer for Pelham in the 33rd minute of the game, taking a cross from Jose Jimenez and firing a shot from the top of the 18-yard box that found the back of the Briarwood net. It was the last goal of the half, but not the last piece of action.

Just before the half, Frost put another shot on goal that was blocked by Torman but not held. Briarwood’s Noah Nall took the rebound, and collided with Torman in the 18-yard box. Torman was visibly shaken up after the hit, and was kept out of the second half for injury concerns, according to Pelham head coach Patrick McDonald. Backup keeper Chase Denson played the second half for Pelham, and came up big on a number of occasions.

“He (Torman) was held out for injury concerns, so we had to make a change at keeper,” McDonald said after the game. “Chase came up big, had a good second half. That’s why you have two keepers. We challenge both of them every day at practice, and Chase came in and kept us in the game.”

Denson was thrown into the fire immediately in the second half, coming up big on a shot from Frost in the 44th minute, and again in the 59th minute, denying another attempt from the freshman striker. Pelham’s best look in the second half by comparison came in the 47th minute, when midfielder Yunior Tejada sent an absolute rocket just over the top of the crossbar from 20 yards out.

Pelham for the most part had the upper hand from a possession standpoint for the majority of the second half, but Briarwood again had better looks at goal, with Frost and Brower both stretching the Pelham defense.

The winner came for Briarwood in the 67th minute. Frost, from roughly four yards on the attacking side of half field, played a gorgeous, left-footed ball over the heads of the Pelham defense to Brower, who calmly took the offering and fired a rocket into the back of the Pelham net, giving the Lions the lead once again, which they did not relinquish this time around.

“They play well off of each other,” Brower said of his two forwards. “We have talented guys across the middle in Griffin (Felton) and Bryant (Wood) as well. And we feel like on most nights one of those guys are going to have a good opportunity to find the back of the net.”

The final 13 minutes of the game were tense and physical, and Pelham had a few opportunities to capitalize, but Briarwood’s back line, which had done a phenomenal job throughout the second half, held, and the Lions got the 2-1 win and subsequent area title.

“(It was) a physical game,” McDonald added. “Tough way to lose. Number eight (Brower) got loose there at the end. I thought we kind of matched their intensity as much as we could. It’s hard to go undefeated in your area. They went 3-1, we went 3-1, it’s just so difficult. To go undefeated in your area when you have three top-10 teams, very difficult to do. But our kids played very, very well. I was proud of our effort and our intensity. Two good strikes by their team was the difference tonight.”

“Everybody just did their part,” Brower said of his team. “I think our fitness level played a factor, and just heart and desire. This is our home field, and our seniors wanted another game on our home field.”