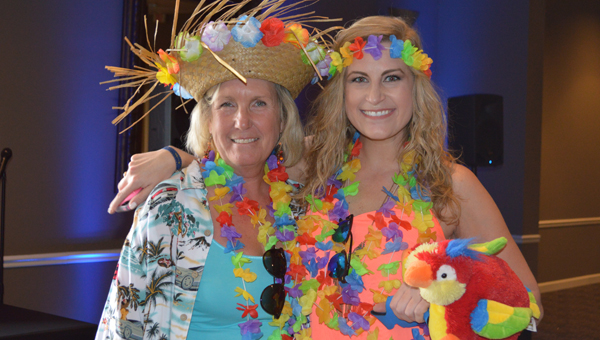 PELHAM— As guests entered the banquet hall of the Pelham Civic Complex April 19 they were instantly transported to an island paradise complete with the tunes of Jimmy Buffett.

The tables were decorated with fishnets and island drink centerpieces, pineapples and fresh fruit were features on the buffet line and beverages came served with tiny umbrellas.

This was the city of Pelham’s Parrot and Fin Party, a celebration kicking off the 2016 concert series at the Oak Mountain Amphitheatre, and the first entertainer to take the stage was Jimmy Buffett. 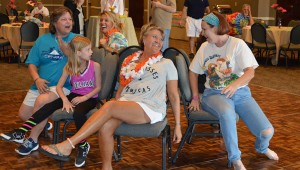 Attendees of the city’s Parrot and Fin Party participate in various games at the event, such as musical chairs.

“Mayor (Gary) Waters is a huge Jimmy Buffett fan, and we work closely with the Oak Mountain Amphitheatre,” said Paula Holly, the city executive administrative assistant. “We just thought this was a great way to celebrate.”

Buffett is best known for his music portraying an island lifestyle and humorous personal experiences, such as “Margaritaville,” “Cheeseburger in Paradise” and “Brown-eyed Girl.”

His fans usually crazy colors and tailgate before a concert, so the city decided to host a tailgate at the civic complex, Holly said.

Birmingham’s 102.5 The Bull was also on-site, alongside several food trucks.

Previous to April 19, Buffett had not performed in Pelham for 24 years. He kicked off the Oak Mountain Amphitheatre’s 30th anniversary season.

Buffett’s performance will be followed by Journey, The Doobie Brothers, 5 Seconds of Summer, Heart with Joan Jett, The Blackhearts and Cheap Trick, according to Ticketmaster.com.

The festivities began at 4 p.m. and lasted until about 11 p.m., continuing through the start of the concert, which began at 8 p.m.

Ticket information for upcoming shows is available at Livenation.com.