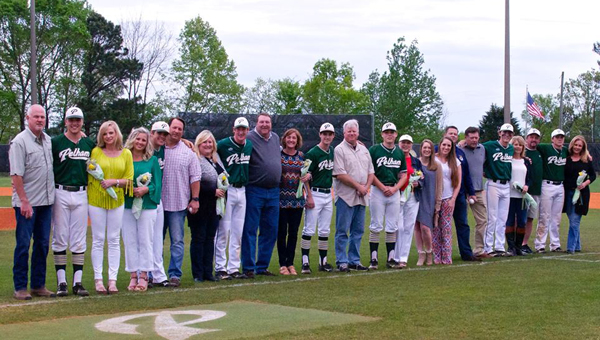 “It’s fun for us to see the finished product of however many years they’ve been in the program,” said head baseball coach Sean Anderson. “It’s just fun to watch them grow and mature and become young men.”

Anderson said many of the athletes have been on the team between four and six years, so the coaches have spent a lot of time with them over the years.

Each of the players presented his mother with a rose and his father with a baseball signed by the entire team.

With four to six years of fundraising, driving, attending games and more under their belts, Anderson said the night was just as much about thanking the parents for their dedication to the team.

Five of the students will be continuing their athletic careers in college and have already signed letters of intent.

Whitman officially signed his letter of intent to play baseball with Mississippi State in November, while Hawkins, Phillips and Rivers signed on Feb. 9.

Hawkins signed with Huntingdon College in Montgomery, Phillips committed to Covenant College in Lookout Mountain, Ga., and Rivers signed with the University of South Alabama.

On March 7, Christian committed to further his athletic careers by playing football at West Alabama.

“Anytime that our players have the opportunity to continue their education and play the sport that they love, that’s a big deal for us and it’s a big deal for them and their families,” said PHS head baseball coach Sean Anderson. “We are extremely proud.”