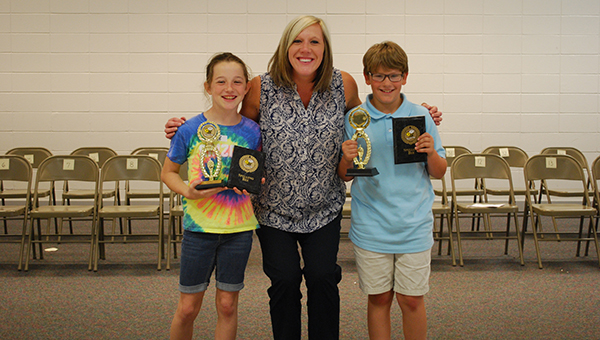 HELENA–Several Helena Intermediate School students eagerly approached a microphone that was set up on stage in the school’s cafeteria on Wednesday, April 20, to see who possessed the skills to be crowned the next spelling bee champion.

Students who won their class spelling bee qualified for the HIS Spelling Bee and many students showed they had the skills to spell with the best of them.

After multiple rounds of spelling, 14 students remained before the start of round four and Helena Intermediate School Principal Kathy Paiml commended the student’s and their spelling skills.

“Everybody did a fantastic job and I’m so proud of each and everyone of y’all,” said Paiml. “Some of those words I even have a hard time with.”

Once the spelling bee got into the later rounds, the words progressively got harder and the only two spellers remaining were a pair of fifth graders, Sydney Risch and Braden Sullivan.

Both students began to grow more anxious as they approached the microphone in the final round, but both showed a lot of poise.

After each student missed a couple of words, it was Sullivan who correctly spelled the word “permanent” to take the lead.

Sullivan had to spell one final word to be recognized as the champion and he did so by spelling the word “picture” correctly.

Sullivan and all of the spellers received numerous cheers and applause for their efforts.

Each spelling bee participant received plaques for participating and

Sullivan and Risch received both a trophy and a plaque for their first place and runner-up finishes.