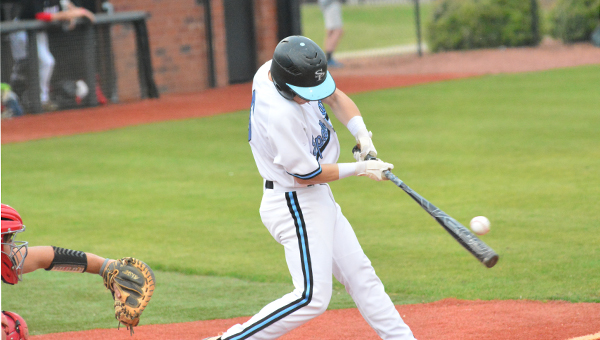 HOOVER – Spain Park came in to its April 19 baseball area matchup with Hewitt-Trussville in need of a win to keep its playoff hopes alive. The Jaguars were 2-2 in 7A Area 6 play coming into the game, with two wins over Mountain Brook and two losses to Vestavia Hills under their belts. Hewitt-Trussville had also beaten Mountain Brook twice and had split its’ series with Vestavia earlier in April, which meant if the Jaguars were to nab one of the two playoff spots out of the area, they had to beat Hewitt-Trussville twice in two tries. Unfortunately for Spain Park, the Huskies used a big second half of the opening game on April 19 to beat the Jaguars 8-1 and secure a playoff berth, and won the second game a day later as well by a 2-0 final.

Tyler Tolbert hit a double on the first pitch of the game, eventually scoring in the top of the first inning for Hewitt-Trussville, giving the Huskies a 1-0 lead in the early going. Spain Park tied the game in the bottom of the third inning when Tucker Hagood, who was pinch-running for Reed Thomas after Thomas hit a leadoff double, scored from third via a Justin McClure sacrifice fly, giving the Jaguars some life heading into the fourth inning.

From that point, the Hewitt bats began to connect at a more consistent pace. The Huskies added a run in the fourth and two in the fifth to take a 4-1 lead, before adding another four backbreaking runs in the top of the seventh, putting Spain Park in a hole the Jaguars had no realistic chance of climbing out of.

Will Battersby threw 6.1 innings for Spain Park, throwing 77 pitches, giving up four hits and five runs, three of them earned, while striking out three. Adam Shultz and Jake Whitehead pitched the final 0.2 innings.

Out of playoff contention, Spain Park was playing its last game of the season for pride just a day later. The game turned into a pitching duel between Spain Park’s Hayden Freeman and Hewitt-Trussville’s Cameron Furr. Freeman and Furr both took shutouts into the fourth inning before the Huskies squeaked a run across the plate in the fourth inning to take a 1-0 lead. Another run in the bottom of the sixth gave Hewitt-Trussville a 2-0 lead, and after putting two runners on base with one out in the top of the seventh, the Jaguars were unable to bring any runners home, and lost their final game of the season 2-0.

Freeman finished the game with 81 pitches over six innings, gave up just five hits and two runs and struck out four. Jacob Rich and Kevin Hopkins were the only Jaguars to register hits on the day, with Rich smacking the only extra-base hit of the game for either team.

Spain Park ends the season with a 22-20 record.

By BAKER ELLIS / Sports Editor NORTH SHELBY – Jeff Robertson, who has been the Briarwood JV volleyball coach for... read more