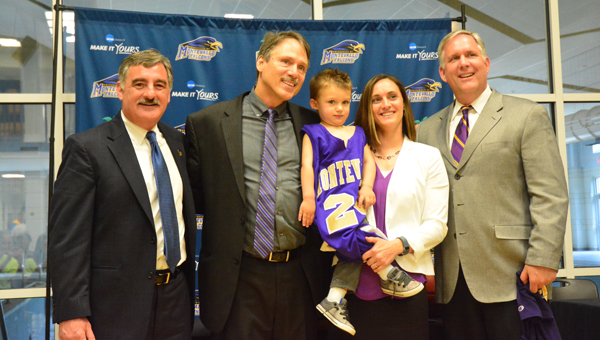 MONTEVALLO – Gary Van Atta is returning to the University of Montevallo. Van Atta, the winningest coach in the history of the University of Montevallo women’s basketball program, is returning to the school where he got his start more than 20 years ago. He will replace Cindy Hillbrich, who resigned from her position as head women’s coach on March 7 after posting a 38-90 record during her five seasons at the helm.

“I’ll tell you right now the reason I’m here is because of my family,” Van Atta said at a press conference on April 20. “This is a great opportunity for me and my family to come together and align our careers one more time in a city that has been so good to me.”

Per a press release from the University of Montevallo Athletic Department, Van Atta was inducted into the Montevallo Athletics Hall of Fame in 1999 for his work as the head coach of the women’s program during his first tenure. He accrued a 166-49 record during his first run as the head women’s coach between 1989-96. Six of his Montevallo teams won at least 20 games, and the Lady Falcons went a program-best 28-7 during the 1993-94 season.

Montevallo was still an NAIA (National Association of Intercollegiate Athletics) member for much of Van Atta’s first run as head coach, and led the Lady Falcons to five consecutive trips to the NAIA National Tournament, including four Elite Eight appearances as well as a pair of Final Four showings. In Montevallo’s first year as a Division II program, Van Atta led the Lady Falcons to a Gulf South Conference East Division Championship before leaving for Division I UT-Martin.

While his past coaching record is impressive and speaks for itself, Van Atta spoke of looking toward what is ahead as opposed to what has been accomplished in the past, emphasizing that his faith, family and the future are the three cornerstones in his life.

A number of players from Van Atta’s first run as head coach were present for the press conference, and Van Atta made a point to acknowledge them, giving them credit for what he was able to do as head coach all those years ago.

Van Atta will once again be tasked with leading a resurgence of the women’s basketball program, and considering his track record, it looks as if Montevallo has found their man, for a second time.