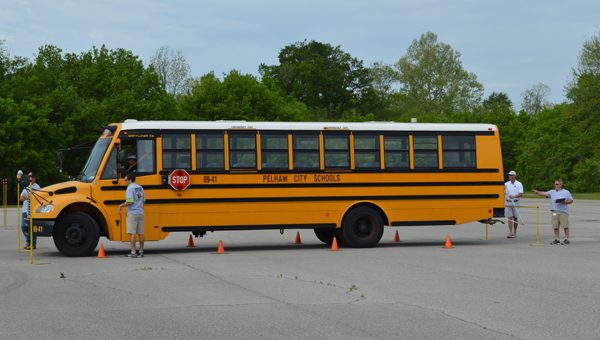 MONTEVALLO— Thirteen of Pelham City Schools’ bus drivers participated in the second annual Bus Road-E-O on April 21, which tested their skills through a driving course.

The drivers weaved through 12 events, including a right and left turn, a stop line, serpentine, backing into an alley dock, a child loading stop, diminishing clearance from 10 inches to 2 inches, rear tandems between tennis balls and pulling up to a curb line.

“It helps them with their skills,” said Transportation Supervisor Thomas Dunaway. “It’s a live awakening to realize, ‘I’m supposed to do this everyday. Am I actually doing these things?’ It tests their skills; it really does.”

The volunteer drivers were also given a pre-trip test in which five items were disconnected on their bus. The goal was to locate the disconnected items.

“I came in it just to have a good time, and that’s really what it’s about,” Dunaway said. “It’s about camaraderie and getting our folks together.”

Out of Pelham’s 41 drivers, Dunaway said 15 initially signed up for the Road-E-O, but two dropped out last minute. Last year, Pelham only had 11 participants, so the event is slowly growing.

Dunaway said he plans on forming a committee next year with two drivers at each school helping to get others involved.

“The best thing about it to me is, them having time to enjoy and fellowship with each other,” he said. “Most of them are scared to death, and some of them tell me, ‘As long as I’m in the top 13, I’m happy.’”

Dunaway said he loves participating in the Road-E-O, and has competed himself in previous years. He drove for Shelby County Schools one year, and then for Pelham before being named the transportation supervisor.

About 20 volunteers judged the competition, and everything the drivers encountered on the driving course was relatable to the real world, according to Dunaway.

The top four finishers from the Road-E-O also have the opportunity to compete in the State Road-E-O in June.